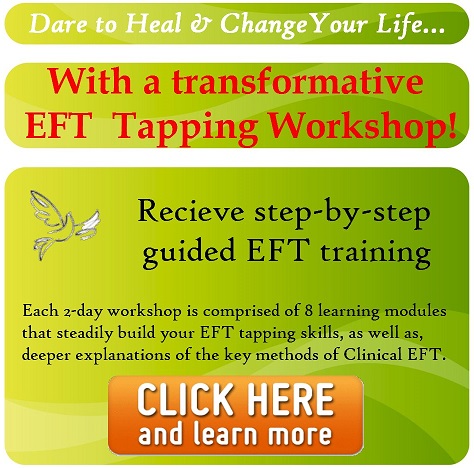 EFT Master Loretta Sparks reveals how she uses EFT tapping for detoxing with examples from a client’s withdrawal from migraine medication and another client suffering the after-effects of binge drinking.

For the past 20 plus years I have been treating alcoholics, addicts, and their families at an in-and-out patient facility for a large HMO in Southern California. About six years ago I started integrating EFT into the work I do there. As anyone who has treated addicted individuals can attest, it ain’t easy work!

However, EFT can make a big difference in increasing treatment effectiveness.

I was asked by one of our physicians to see a 77-year-old woman who was having a very difficult detox from the migraine medication she had been taking for years. She was in a lot of discomfort from the withdrawal of her painkillers and was in the throes of a migraine.

We first did a number of tapping rounds on the withdrawal symptoms focusing on the patient’s fear of the sensations/discomfort in her body and her loss of the only help she had for her migraines, her painkillers. We got her SUD Level of discomfort down from a 9 to 2. Because our time was limited, I suggested at that point that we address her migraine. She agreed. Her migraine was at a SUD Level of 10.

Because her head hurt too much to tap, we concentrated the tapping on the collarbone, under arm, and back of hand treatment points. In less that 5 minutes of treatment, the migraine was essentially gone. She saw me after discharge from inpatient and reported that the “tapping” was the most effective treatment she received in the hospital. Her headache had not returned. A couple of times it started to return and she tapped it out.

The second experience I wanted to share was in the form of a phone call (around 10:30 at night) from a colleague who had taken an EFT workshop from me. He had just been released from the hospital ER where he was taken as a result of a binge drinking episode. He felt terrible, tremulous, head hurting, and with a generalized feeling of malaise. His knowledge of EFT made it easy to assist him over the phone.

Alcohol often floods the system with sugar and the detox (withdrawal) process can leave the body craving it with symptoms similar to those of hypoglycemia.

I asked him first to go drink a large glass of orange juice (natural sugar) and then come back to the phone. When he returned, I lead him through the EFT tapping protocol twice. By the time we finished, he was steady, his head did not hurt, and he was tired and wanting to go to bed.

EFT allowed me not only to reduce these people’s discomfort, but also to enable them to learn the awesome healing power of their own bodies.