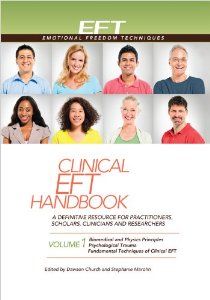 “Sue” came to visit my clinic as a last resort in her fight against her alcohol addiction. At that time she was only just managing to hang onto the threads of her life as a professional and a mother of two young children. Two months before visiting me, she had been on the medication Antabuse (disulfiram) to help her abstain from drinking.

All her problems and cravings remained as before, however, and they were driving her to a fever pitch, which left her in an emotionally volatile state.

Now, she felt she didn’t have a way to tranquilize her anxiety.

At our first session, I introduced her to EFT as a sort of emotional acupuncture without the needles. Sue had found acupuncture helpful before, so this explanation sounded okay to her.

When we began, we faced flat emotional responses because Sue was unable to connect with any emotional intensity regarding her stress, her craving, or even her low self-esteem. We tried many avenues, but failed.

I considered tapping on “Even though I cannot connect with the emotional feelings that frequently swamp me,” but something stopped me.

At the end of the session, I decided to teach her the Basic Recipe, using a slight headache Sue said she had. When we scaled the SUD level of intensity number (0 being no headache and 10 being an intense headache), she said she was only around a 2 or a 3. So it was not an ideal problem to work with (higher level intensity can provide more noticeable changes when using EFT).

After two rounds of tapping through the procedure, Sue said her mind felt clearer and her headache felt different.

On the third round, we incorporated tapping:

“Even though I still have some slight headache feeling, my mind is clearing and I completely respect myself.”

The Reframe we used was:

This Reframe began with a puzzled intonation and, as we moved down the face in our tapping, this was changed into “I don’t know how my head is clearing.” Sue smiled and we stopped at the chin point to see how she was doing. When we both began to laugh, we knew it was gone.

Sue went home to use EFT before our next appointment at the same time the following week.

At Sue’s second session, she was exuberant. She had literally used EFT on everything. She said she had not realized just how much stress she was experiencing and had found that tapping reduced her anxiety to the point of calm confidence each time she used it. This realization gave her insight into why in the past she would mask her anxiety with alcohol. Among other things, it explained why she would drink alcohol on her way home before facing her family at the end of a hectic day.

Doing EFT throughout her busy day as well as on her way home was enabling her to reduce the buildup of stress at its source.

Having EFT gave her confidence to face situations she had previously feared. In her position as head of a local school, she was also finding several ways to introduce EFT as a stress management tool to her staff. As a group, they had already researched EFT online and read many of the EFT case histories found there.

As a therapist, what I learned from this experience was profound. I have worked for many years with various addictions using traditional methods, but those methods frequently take much time and effort. By contrast, EFT has an energy/spiritual essence of its own and this energy, with a desire to share, provides much more efficient healing.

With my logical rational brain, I may have thought as a therapist that working on something as simple as a headache would not help with all these deeper problems. “Getting out of the way” is often spoken of. I truly believe when we get out of the way, we make room for healing to happen. That way, we can know that the healing happens through us, and not by us.