By Dawson Church, PhD, author of EFT for PTSD and The Genie in Your Genes

In our nonprofit work through the Veterans Stress Project, we’ve helped some 20,000 veterans and their family members recover from PTSD. We’ve seen up close the devastation that PTSD wreaks on health, family, and community. Among the most common PTSD symptoms are: 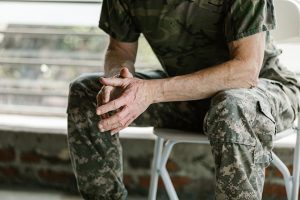 A veteran named Davis S. described his situation like this:

“My life was in shambles. I was in the middle of a disastrous divorce. My youngest son was born and I was not allowed to be present. I had angry outbursts, migraines, nightmares, flashbacks, and bouts of depression regularly. My mind and my body began suffering from the effects of the VA medicines (i.e., lack of libido, weak and dizzy in the morning hours, and vertigo every time I blinked my eyes). I had no emotions or compassion anymore. I was falling apart, with no hope of gaining control again. Thoughts of suicide entered my mind daily. All I had were my combat memories. I felt alone.

“I began to explore the thought of attempting this EFT psychobabble therapy. Skeptical is an understatement…What did I have to lose? Besides, it was free, and I was rock-bottom broke at the time anyway. It was this or the end of a rope…I chose life (a big step for me).

“I broke my neck in Iraq and had suffered from excruciating migraines, sometimes as many as three a day, ever since. On a scale from 1 to 10, and 10 being the most horrible pain imaginable, I had a 10-size migraine for [my first EFT session with my practitioner Marilyn]. Marilyn’s first priority was to prove to a skeptic that the EFT works on everything…even migraines. ‘Whatever, let us get this over with so I can swallow a bottle of Excedrin Migraine and go to sleep!’

“Within 10 minutes, I was a believer! For the first time in five and a half years, I was migraine free! Amazing!… I fell asleep that night easily and stayed asleep for more than two hours, which was unheard of for me at the time. I felt a difference the next morning in my memory of the story I told. Funny thing, it was just a memory now, not a living nightmare.

“Because of the Veterans Stress Project and EFT, I can sleep at night without the aid of sleeping pills. I have only had two migraines of low intensity in the past 11 months. I am no longer on antidepressants. My ex-wife allows my boys extended stays with me. I lost 40 pounds. I have friends, and the best of all, I have my life back! For the first time since my combat days ended, I can share my stories with my loved ones without the fear of my own emotional responses. I now have the ability to face my past and my memories with confidence and security that I will be safe and comfortable. When asked how I feel, my only response is “I’m free!”

Not only are there thousands of stories like those of David S., there is a solid base of research showing that EFT tapping works for PTSD. A meta-analysis of seven randomized controlled trials examined the size of EFT’s treatment effect and concluded that: “The results show that EFT is efficacious and reliable as a treatment for PTSD in time frames ranging from 4 to 10 sessions. EFT is safe and can be used as a self-help practice as well as a primary evidence-based treatment for PTSD.”

Here is a video of me talking about how to use EFT for PTSD.

EFT tapping isn’t just effective for veterans. It has helped the victims of domestic violence, abused children, refugees, and many other groups.

It may seem unbelievable that a simple self-help method can help erase PTSD symptoms in just 6-10 sessions. But that’s exactly what the research demonstrates.

If you or a loved one suffers from PTSD, it’s time to take action. Unless you get effective help, the symptoms of PTSD often get worse over time, a phenomenon called delayed-onset PTSD. Family members are affected too, through “transferred PTSD.”

On this page you’ll find many resources to help you. My passionate desire is to see anyone with PTSD drop their suffering and reclaim their potential as David S. did. Please use the resources on this page and become one of the thousands of PTSD sufferers who have gotten their lives back after learning EFT tapping.


Tap Along with These Videos

We have workshops all over the world every month.

Book a session with one of our highly trained certified Clinical EFT practitioners.

Learn EFT in Our Books

Get Help Through the Veterans Stress Project

Veterans and their family members can get free or low-cost treatment through the Stress Project.