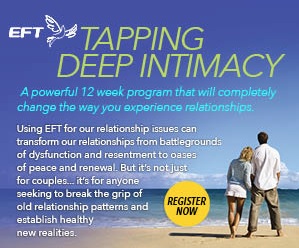 Here, Dawson Church, shares an excerpt from his Tapping Deep Intimacy course and a personal video story relating how EFT tapping during a difficult relationship discussion brings about a peaceful resolution.

I grew up in a family in which emotions were associated with pain. Emotion meant anger, blame, and criticism. I call these the ABCs.

The most emotional people in the family were the most fun when they were in a good mood. When they were not, which was most of the time, they used that emotional power in destructive ways. Other family members were always on the lookout for signs that they were getting emotional, because emotional meant that they were about to let loose with a big dose of ABC for anyone unfortunate enough to cross their paths.

I was trained that emotion equals danger.

The ability to go into stress mode when confronted with the unknown was a valuable survival skill to our distant primate ancestors. Paleolithic people weren't facing stressors as minor as a broken zipper or a verbal faux pas; failure to notice problems in the environment carried much more serious survival consequences for them back then. You have the same neurological wiring in your brain that your ancient ancestors found so useful in confronting life-or-death situations. Among the signals processed by the amygdala are those from the human beings around us.

We subconsciously analyze their body language and facial features for signs of threat. If they appear familiar and nonthreatening, the amygdala moves on to the next stimulus. It receives and processes information faster than our frontal lobes, our thinking brain, can react. This is a sensible evolutionary arrangement because weighing different options, writing music or poetry, and abstract thought don’t have to occur in a flash, the way survival information must be processed.

The amygdala kicks in without our conscious control, producing negative emotional reactions to unfamiliar or dangerous stimuli.

Beliefs, values, and attractions are held in the amygdala, and the emotions they arouse condition our logical mind.

You might have a negative emotional reaction to something before you have a chance to give it objective consideration. In this way, your thoughts are run by your feelings. One of my favorite quotes is by brain researcher Joseph LeDoux, who calls this, “the hostile takeover of consciousness by emotion.” The ability to identify and respond to threats is hardwired into our brains.

If families are full of anger and emotional violence, the brains of those affected are always on high alert. They become very sensitive to the facial cues and body language of potentially angry people. I remember how, as a child, I “tiptoed on eggshells” for fear of setting off an emotional explosion in the volatile adults around me. When emotions ran rampant, pain followed, as the emotional person took out his or her anger and frustration on the nearest target, usually a child.

So what does one do when in a relationship when situations arise that need to be discussed? My recommendation is that you tap before, during and after the discussion.