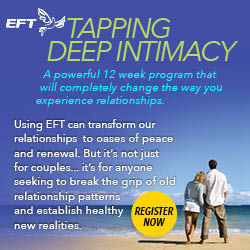 As we consciously create our realities, we tend to focus on the material things that we want: a big beautiful house, a shiny new sports car, a cup of coffee.

We often forget or don’t even realize that we can use the same attraction principles to change our relationships. We get so caught up in what we don’t like about someone, that we forget that we have the power to change the relationship. When this happens, tapping on what we don’t like can help us to let go of our anger and bitterness and allow true positive change to take place.

I recently worked with three wives who were frustrated by their husbands’ behaviors (or lack thereof).

Even though two of these women were very familiar with the law of attraction, and had been practicing it to create many wonderful changes in their lives, they struggled to release beliefs that allowed them to create the relationship with their husbands that they sought.

The first wife, we will call her “Pam”, was fed up and frustrated by her husband’s lack of motivation. We worked together on her frustration, tapping while she vented. The day after our session, her husband made a list of everything that needed to be done around the house, making statements like, “I just don’t understand how I have let these things sit for so long.” He then promptly began to work on the first item on the list.

The next wife that I worked with, Samantha, had had enough of her husband’s yelling and temper tantrums. During our session, we tapped as she expressed that she just didn’t think she could take it anymore. She couldn’t handle being around him when he was like this. Following this session, her husband stopped yelling almost completely and said to her the following week, “I feel different, I feel calmer. I don’t understand what has changed, but I have been so calm lately.”

Samantha was so grateful that just one tapping session brought about such a wonderful change in her husband and in their relationship.

The third wife, Sally, had a very similar frustration to Pam. She felt like she did all the work around the house and her husband just sat around, letting her do it all. This couple owns agricultural land and, in addition to the work the wife does, they hire a man to come once a week to work on the property. We tapped on how lazy her husband is and how she does all the work.

The very next morning, her husband woke up very early, got dressed, went outside, and planted 30 trees. She did not understand how tapping for her own feelings around her husband’s laziness caused him to be motivated to work.

What we often fail to understand is that we have a part in creating the people who are standing right in front of us. All of our likes, dislikes, pride, and frustrations. We are always receiving what we are asking for based on our own vibration.

So if there is something you don’t like about a coworker, spouse, child, or friend, let tapping be your outlet and maybe you will be pleasantly surprised at what happens next.