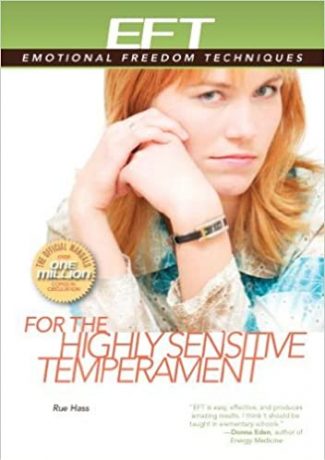 Petra came to my office very depressed. She had recently moved from the East Coast to California, leaving behind family. She had lost her sister to cancer soon before 9/11, also lost investments in the stock market, and consequently lost her home.

Petra wanted to get over her depression, and wanted to be able to say no, particularly to her mother who expected Petra to take care of her financially, as well as her middle-aged brother.

She never felt good enough no matter what she did and she always felt that she needed to prove herself. She mentioned she also had a need to be right. Petra also had a terror of heights and had claustrophobia.

Even though whatever I did as a child was never good enough to please my parents, I’m still a wonderful person anyway.

Even though I didn’t feel loved, all I got was criticism, I still love and accept myself anyway

We then reframed and tapped on the thought that her parents did love her, but didn’t know how to show it the way she needed to hear it. We gradually changed the words as she closed her eyes, tapped on her karate point, and imagined talking to her parents.

Even though I’m scared to say what I feel and think because you won’t love me, I can love and appreciate myself anyway.

You didn’t show your love to me the way I wanted it anyway, so I might as well speak up now.

I accept that you loved me even though I felt that you didn’t.

I understand you were pushing me to succeed beyond your struggling accomplishments. (Her parents were immigrants who didn’t speak English when they first arrived here)

I recognize that was how you thought you were being loving.

I don’t have to push myself that hard any more to earn love and feel worthy, I already am.

Her level of SUD intensity dropped to 0 out of 10.

Next we addressed the issue of her father always needing to be right.

Even though my father is yelling at me and always thinks he’s right, I am a wonderful person anyway.

I hate it when he’s pointing his finger and not listening to me …he always believes he’s right.

Even though I know I was right, he didn’t listen to me, as I was the child. He thinks he’s always right but I know I am. If I was an adult I could be as right as him but he’s the adult.

A smile of understanding spread across her face.

I’m always right when I tell my children what they should do. I know I’m right, but somehow they think they have a valid argument.

How can they be right when I know I am, after all I have had more experience.

How is it possible I became the same as my dad in this area?

He was always right and so am I!

I choose to release this need to be right, right now.

I allow myself to let it go now.

I asked her if anything else about her parents really bothered her, and she mentioned how her father used to call her “stupid.” I asked her if she ever called herself names and she said, “Yes but she in Russian.” I had her close her eyes and tap on her karate point as she imagined her father calling her stupid.

I hate it when you call me stupid because I’m not.

I know you re trying to motivate me to do better and succeed by criticizing me and calling me names but it’s not the best way to do it.

Just because your father called you stupid and worse, you don’t have to speak to me that way.

I forgive you for calling me stupid, you had my best interests at heart.

I need to stop calling myself stupid.

I’m a wonderful person even if I burn the dinner by forgetting what’s on the stove. I am not stupid if I do that, I just did a stupid thing. I am not the dinner.

I don’t need to be mean to myself because I don’t deserve it. My parents really thought I was great, they just wanted me to be even greater.

I don’t have to be the best to earn love.

I don’t have to be right to feel good.

I don’t have to be afraid of falling, which means failure.

I am wonderful just because I exist.

I’m loving and smart with a great sense of humor.

I can say no to my mother and feel okay with myself.

I don’t have to be right and I choose to be happy in my new life.

I’m wonderful, and perfect in my seeming imperfection.

When she returned the following week her energy was completely different. She had told her mother that she was not responsible for her, or her brother, as they had enough money of their own. She had not needed to be right. She was in love with California.

She had gone to look at open houses with her husband and one of the houses was on stilts. Apparently she not only went in the house she walked outside and then to the edge of the balcony overlooking a canyon. She then said to her husband, “Look at this spectacular view! I would love to live in a house like this.” His mouth dropped to his feet, as before using EFT she would never even go inside a hillside house, or even feel comfortable driving up a hillside.

He then asked her if she realized that they had earlier parked in a subterranean garage, a level deeper than the last time when she became claustrophobic and had a panic attack. She had not even noticed!

Petra’s depression was lifting, and so was her fear of heights. She felt hopeful about their future.

We had not even directly addressed her phobia, and yet it was so intertwined with how she felt about life and herself that using EFT to set her free of certain negative thoughts also set her free from her anxiety and fears.

Now she also has a tool for when anxiety comes up, or when she feels herself moving into the dark place of depression. EFT worked for her and it gave her something to trust when a situation feels out of her control, which gives her the confidence to fully embrace life.