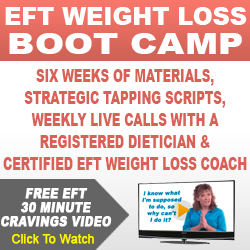 I had to fall into a shame-ridden low point in order to try something different. EFT tapping was introduced to me by my EFT coach and I found that it helped me center myself, take a step back, and pause.

EFT Tapping has been helpful:

• When obsessed with finances.

• Before a difficult conference at work.

• After a difficult situation at work.

• Before going to sleep if there’s something on my mind.

• In anticipation of a visit with an annoying family member.

• After an uncomfortable exchange with a co-worker.

• While driving to work in the morning.

My words have been:

“Even though I feel guilty about [making poor financial decisions in my divorce], I deeply & completely accept myself.”

“Even though I fear today will be [a rough day at the office], I deeply and completely accept myself.”

“Even though I feel that [I disappointed my parents], I deeply and completely accept myself.”

I seldom tap my SUD Level of Intensity 0 - 10 number from a high of 10 down to zero, but rather from approximately a high of 8 down to 4, in 10-15 minutes.  I continue tapping later in the day or again the next morning and get the SUD number down to 2 or 3.  EFT calms me and is a welcome change from the negative self-talk that usually bounces around in my head.

I find that feelings of stress, fatigue, guilt or fear would reappear when  I’d binge again.  My mind was filled with regret over past events which continued to haunt me.  I felt unworthy and comforted myself with food.  It was a vicious cycle of bingeing and self-loathing.

With tapping, I was able to reduce some negative feelings.

However, bingeing was still a huge problem which brought up guilt, and it was the main reason I was interested in EFT.

"Even though I’m afraid I’ll binge today, I deeply and completely accept myself”

I’d feel better about accepting myself but I might still binge.  And binging caused me to feel worse about myself again.

Growing up, I was raised in an environment which was not open to expressing anger, frustration, disappointment, or failure.  With a soft voice, I responded sweetly in all situations.  I repressed emotions so that I might appear happy and be the person my parents wanted me to be.

My family was afraid to address problems and challenges – these were never discussed.

Starting in my early teens, I quietly refused to do what a “person of authority” told me I should do.

This person was a parent, older sibling, college professor, or my husband (now ex-husband, who thought he had authority over me!).  My passive aggressive behavior explained why rather than completing the other person’s request, I’d express anger or resentment by doing nothing, making excuses, and actually working against the task.

This counterproductive behavior affected many areas of my life.  I shudder to think of my deliberate, repeated failures, and my passive resistance to follow through even my own expectations.

Contemplating the “persons of authority” in my life, it occurred to me that maybe I am a person of authority in my own life, and I rebel against myself in my efforts to lose weight and eat in a healthy manner.

Could it be that I’m not going to do what I tell myself I should do? It’s time to be truthful and face my self-sabotage.

Random House Dictionary defines sabotage as "an act or process tending to hamper or hurt.  Deliberate subversion."  I consistently started from the premise that I was a loser.  I felt unsuccessful and destined to fail.

I was full of negative self-talk and I had a tendency to see myself as unworthy. I'd sabotaged myself when trying to change my eating habits.  I’ve been in a pattern of eating in a healthy way for 5 or 6 days, then bingeing for 1 or 2 days.

My weight has gone up and up slowly over the last 15 years, and it keeps going up!

One day, trying to be abstinent, I hit a challenge at work during some conferences, when there was a big bowl of chocolate candy on the conference table.  With no one else in the room, I helped myself to handfuls of candy and started a binge that lasted all day, full of insanity, leading to self-loathing and guilt.

I was scheduled to be in this conference room with the same people for five more days, so I talked to my EFT coach about my guilt, temptation, and fear.

Ann commented that some people might tap: “Even though I really want the M & M’s” -- and I thought BINGO!

It was an “aha” moment to admit head-on that I wanted to eat them.  Instead of tapping about fear or bad feelings, I decided I’d tap

“Even though I want the M & M’s, I deeply and completely accept myself.”

It still sounded too nice to me.  Knowing that if I started on the chocolate candy, without a doubt it would lead to a binge…therefore, could I say that if I want the candy, I really want to binge?  And if I binge, I really want to be fat?  Thinking that I am a “person of authority” and even though it’s ridiculous to aspire to bingeing and obesity, maybe I was quietly resisting doing what I was telling myself to do.

Saying, “Even though I’m afraid I’ll eat the candy” didn’t seem to have the punch I needed, so I decided to change my thinking to:

“Even though I want to binge, I deeply & completely accept myself.”

Just saying “I want to binge” got my attention and I tapped from 5 to 0 quickly.

Facing bingeing head-on as something that I WANT to do and tapping down to zero made it easier for me to manage my food and feel better about myself.

Some tapping statements that have punch and get my attention are:

Even though I want to binge, I deeply and completely accept myself.

Even though I want to be fat, I deeply and completely accept myself.

Even though I want to eat the whole cake so no one else can have any, I deeply and completely accept myself.

Even though I love to stuff my body full of food trash, let it churn in my stomach, and make me sick, I deeply and completely accept myself.

Even though I love self-abuse, I deeply and completely accept myself.

Even though I love indigestion & constipation, I deeply and completely accept myself.

Even though I love to sabotage myself, I deeply and completely accept myself.

Even though I want to be obese, I deeply and completely accept myself.

The statement needs to be ridiculous and an absurd notion that I can visualize.  I visualize myself as obese, bingeing, unable to do anything but eat. For example, I might picture myself sitting in a corner on a little stool eating an entire cake or hiding in a closet, stuffing myself with sugar-laden food.

I tap during quiet time before my morning shower.  I sit down at my vanity in the bathroom, read a devotion, say a prayer, then write in a small spiral-bound notebook the date, what I’m tapping about, then I record the number I feel after each sequence, from 10 to 0 with ten being feeling the most intense and zero being no feelings.

I usually start with a 5 and tap to zero, until I get a queasy feeling in my stomach – an uneasy feeling – and food doesn’t sound good.  I tap down to zero until there is a physical response. This takes approximately five minutes.

Throughout the day, if the thought of turning to food for comfort enters my mind, I tap on my collarbone and both sides of my wrist:

“I want to binge on [name what I am craving]”

Until I sense internal discomfort.

Even if I haven’t thought about food, it helps prevent bingeing behavior by tapping while in the bathroom, stopped at a traffic light, or waiting for a TV commercial to end, many times just a quick tap on either side of my wrist.  This is a reminder that it’s a lot more fun to go through my day with sensible eating than with self-loathing and preoccupation with food.

I’ve had 8 good weeks with only one day when I slipped and binged. This is a big improvement for me.

I’m experimenting with other feelings I might tap about, and I’ve found the topic needs to get my attention and be an absurd notion in order for me to tap down to zero.

For example, we had a talkative weekend guest coming and I feared the constant conversation would wear me out.

“Even though I love nonstop talking and nonstop questions, I deeply and completely accept myself.”

Using these words helped me see her talking as silly and insignificant. I visualized her talking for every minute of her visit.

In the end, her chattiness was not a problem for me, considering our long friendship. I also visualized myself taking a few minutes to myself each day, listening to music and relaxing in my bedroom.  It was a great weekend.

My days go better when I take ten minutes each morning for reading, meditation or prayer, tapping, and checking in with my EFT coach by telephone.

EFT and visual imagery have helped me tap to a SUD number of zero quickly, and when I’m tempted by a plate of cookies or donuts at the office, I tap my collarbone and either side of my wrist until I have the physical response – a sick feeling in my stomach.

+1 #1 Nina 2016-12-11 18:25
This was really helpful for me to understand some of the thoughts and issues my clients go through. I will try some of these statements with my clients this week. Thanks for sharing this!
Quote
Refresh comments list
RSS feed for comments to this post