Master EFT Practitioner Sonia Novinsky, PhD, writes this account of using EFT to help a personal trainer overcome her bulimia, as well as stabilize her feelings to a point where she no longer required antidepressant drugs. 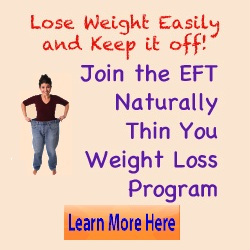 I will share with you as much as my English allows me. I wrote this over time, as a letter, and followed up with Shelly twice.

Shelly is my 34-year-old bulimic client, who is a personal trainer, married, with one child.

I worked with her using EFT once a week for 3 months. Since that time she has come to see me once a month, only for checking in, and her symptoms haven’t come back.

Shelly’s bulimia symptoms started in her early 20s (24, when she got married). From menstruation phase (11 years old) until she was 24 she was not allowed to date, go out, take a shower, dress herself beautifully, etc. She spent her days in her bedroom, crying most of the time: feeling shame and feeling fat. Even though she knows these years were very painful, she has almost no memories of any specific days.

She became severely depressed have her first child was born.

When she first came to my office she was taking Reductil, Prozac and Triptanol. When we were done with all of her EFT sessions she was free from these drugs.

Her symptoms were that she ate compulsively, until there was no place left in her stomach (mainly in the evening) and she would be painfully full. Then she would vomit or run 10-30 km to sweat off any calories consumed.  Often she would do both.

Then she would cycle back to eating again. She was absolutely obsessive with losing weight, yet she wasn’t overweight at all. She’d even had 3 liposuction procedures on her stomach and buttocks. She was also a compulsive shopper — shopping until she would be financially bankrupt.

I worked with EFT plus affirmations.

The main issues I worked on were:

1. Her mother was very sick since adolescence: a very rare kind of leprosy, and there was no cure available. She has very disagreeable spots on her skin. Shelly was never given permission to develop her own femininity. She felt guilty about being beautiful.

2. Her grandmother was also living in the same house, taking care of Shelly’s mother and the children. She was a very authoritarian person, violent, seducing and intrusive (including in sexual issues) — which left Shelly wiht feelings of both hate and guilt.

(Grandmother used to say that Shelly and his brother were responsible for spots in mother’s body). Shelly felt guilty all the time and wore only male clothes.

3. Her father was a compulsive eater who felt trapped.  He didn’t know the mother’s medical condition before they were married which caused violent conflicts at home, all the time. She felt that her father also looked at her in a sensual way, and with contempt.

Once she put her hand on his shoulder and he screamed: “I am not your boyfriend.”

The family was filled with feelings of shame and guilt mixed with a lot of passion and rage.

When Shelly occasionally would feel better, be skinnier, and feeling more beautiful, her father would compliment her on how she looked. This would immediately trigger deep tension in Shelly and the compulsion to eat and throw up the food, then she would begin putting on weight again. She felt that food was bad for the body and had to be thrown away in some way (vomiting or aerobic activity). She had a deep fear of being beautiful, fear of not being able to set limits, and a fear of becoming a whore.

4. Marriage issues with her husband and his family.

Results after tapping on her fears, her feelings, and her bulimia triggers:

1. More comfortable when visiting her mother and father. No tension felt anymore.

4. She now can look in the mirror and love herself. Rage=0

5. She is now putting limits: and is discriminating more herself from her husband and his family (very intrusive). Being able to say: “I don’t want you here today.”

Job as personal trainer: 7 clients per day (earning more money than ever before)

But something happened with her eating compulsion.

After our last session I called asking for authorization to share her story to a magazine that invited me for an interview. She agreed immediately, but this phone call triggered a very anxious feeling/belief:

“I can’t deal with a success. I can’t sustain a success, there is no long-lasting success for me.”

We worked on an image he had in her mind of an Indian woman, very beautiful, being punished because she betrayed someone.

Shelly is finally feeling great. She is using EFT on everything.  I will see her next week for the last time.

1. She is dressing herself in a feminine way almost everyday.

2. Someone said, “How thin you are!” She liked this and did not feel the urge to eat compulsively.

3. Her mother said to her, “The way your are using your hair is like whores use it!” She just smiled and told herself: “I am beautiful, my hair is beautiful, and you can’t make me feel ashamed or guilty.”

4. She is enjoying wonderful moments with her husband.

5. Just before menstruation she felt dopamine high and serotonin low and she ate a piece of chocolate and stopped immediately.

6. Over the weekends (when she used to eat a lot), she now talks to herself as she taps:

“Even though I have this urge, I deeply and completely accept myself because I prefer to have the pleasure of feeling healthy all the time, so I chose not to believe that eating a lot right now will bring me the same pleasure. I can postpone my pleasure.”

And she is playing with this new possibility in her life, to postpone pleasure sometimes. For example, she postponed the pleasure of reading a magazine she wanted to read alone in a peaceful moment and not in the moment she bought it to test her ability to postpone immediate gratification.

7. She was alone Saturday night (a good moment for the compulsion) and she didn’t feel emptiness inside.  She called some friends, she drank a juice, she watched a soap opera, and she fell asleep feeling complete.