How I Used EFT to Help Professional Golfers Improve 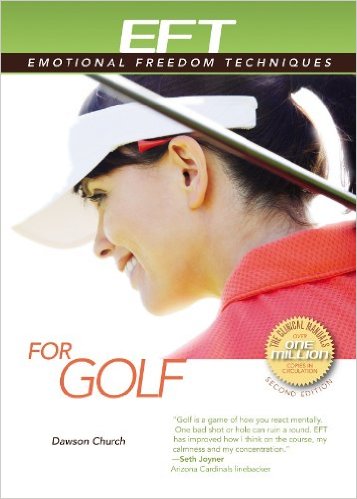 Dr. Brent Thomson, a specialist in sports performance, describes how he used EFT to improve the games of two professional golfers. Of the obstacles facing many of athletes, Dr. Thomson says is the "tendency to build in lots of unconscious self-limits and self-defeating beliefs that sabotage performance." Here, he illustrates how to clear these limits and beliefs.

I'd like to share a story about EFT and my first professional golf client. This proved to be a very rewarding and reinforcing referral, as it resulted in this individual winning the Minnesota PGA Senior State Match Play tournament in 2001. He attributed his win mainly to using EFT both before, and during, the tournament.

I also worked with a club professional in Minnesota who made the cut to participate in the 2002 U.S. Open at Hazeltine Golf Club in Chaska, Minnesota, largely due to EFT. I would like to relate in this article how I worked with these golfers and what areas we worked on. I hope this will provide some useful information for you to use in your own training efforts.

The problem that usually needs to be worked on first is to expand one’s comfort zone. We have a tendency to build in lots of unconscious self-limits and self-defeating beliefs that certainly can sabotage our performances. I start with addressing the SUD Level of Intensity from 0-10 with ten being the most intense around self-imposed limits. It's often at  an 8, 9, or 10.

“Even though I may have barriers to shooting consistently at par or lower, especially in tournaments, I deeply and completely accept myself.”

Then we'd continue doing EFT untill it registered 0 on a 0-10 SUD Intensity scale. I'd then instructed them to now tap with using an appropriate choice statement, such as:

“I choose to see myself being confident, relaxed, and powerful on the golf course at all times, especially in tournaments."

I would use a 0-10 SUD scale (with 10 indicating total belief in the statement) in order to find out how much they believed that the choice statement was true for them. With this baseline, I would then have them repeat the choice statement three times at each tapping point, starting at the eyebrow point and finishing at the underarm point. I asked them to take their time saying their statements while utilizing imagery to “see themselves becoming” the statement on the golf course.

We would then take a 0-10 rating after each round to see how much they now believed in their choice statement. We would continue this process until they felt a 9 or 10 on the choice statement.

I'd turn my attention to individual negative feelings (both physical and emotional) that were getting in the way of peak performance.

These feelings usually revolve around the following: frustration, anxiety, fears, and physical tension or pain.

More specifically, common issues are the following: fear of failure (making mistakes), fear of embarrassing themselves, fear of playing in front of a large gallery of spectators, physical tension or pain in the muscles while playing (specify where), frustration after missing a shot, losing focus, anxiety about hitting the distance, mental tension (fuzzy thinking or confusion), and disappointment when playing poorly.

We then proceeded to “chop down those emotional and physical trees” until they no longer presented a problem (0 on the 0-10 intensity scale). At this point, I would again turn to writing out a coping self-statement for each emotional or physical tree that we chopped down in order to affirm and build the positive. There’s an old saying in cognitive therapy: “What you choose to focus on, you tend to energize.”

EFT does such an outstanding job on chopping down the emotional and physical trees, it really helps smooth the way for planting new behavior and thinking choices and makes it much more likely for these behaviors and new beliefs to be realized.

An example of this would be:

“I choose to see myself maintaining my focus during my round and at the same time remaining relaxed.”

We would then continue to plant the positive until this registered a 9 or 10.

Finally, I would turn my attention to any problems with specific aspects of the game and start to tap them down. Examples of potential targets would be: lack of confidence with using woods, problems with using irons, problems with putting, problems in using the sand wedge, and difficulty playing in poor weather conditions.

An example would be:

“Even though I’m having a lot of problems with putting lately, I deeply and completely accept myself.”

I would then proceed to set up a 0-10 intensity scale and continue to work on it until it was down to a 0.

I would then select a choice statement, such as:

“I choose to see myself draining my putts with consistency.”

We would take an initial 0-10 baseline on how much they would believe the statement until the statement registered a consistent 10.