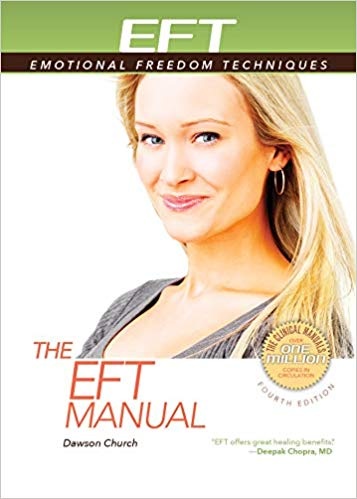 In this article, Maryan Webster takes us step by step through relieving a current migraine, and then clearing the incidents from a client's childhood that were contributing to her migraines. The client began with no idea what they might be connected to. Maryan wisely had her tap on "Even though I don't know what caused this..." and similar Setups. Soon the connections emerged. They cleared the "table legs," and the "tabletop" of her migraines collapsed. A year later, the client was still migraine free.

"Ginny," a successful executive, came into my office after a particularly tough board meeting, with a migraine in full swing, a perfect place to start tapping. At her request, I dimmed the room lights, as light was a trigger that made her migraines worse.

We began tapping simply on the "features" of the headache:

This headache...This feeling like a cap of spikes pounding into my head...The constriction behind my eyes...The light like a spear going through my eyes to the back of my head...

We tapped six full rounds of EFT, incorporating the hand points, wrists, knees, and ankles. With a starting 0-10 intensity of "200" (according to Ginny), she came down to an 8. In three more rounds, she was down to a 3. In another round, the intensity went to 1 and hovered there for a further round. We did a floor-to-ceiling eye roll while tapping continuously on the Gamut point and Ginny reached a 0 on the pain of the migraine.

We tested her results by "recreating" the board of directors and role-playing the scenario that caused her current headache.

We further tested by turning on first one lamp, then another, and finally having Ginny go out into the garden without her customary thick black sunglasses. The migraine was cleared. Nothing reproduced her symptoms. "Amazing! Completely Amazing!" were the words she used to describe the swift resolution to her pain.

As soon as her pain had gone, Ginny turned to me and said, "I want to find out why this happened. If I don't know and do nothing to stop it, it could happen again." I agreed—finding the root of the problem is the main portion of this work.

I explained to Ginny the concept of the migraine or symptom itself being the "tabletop" with the "legs" being those contributing incidents we were going to find and eliminate. Collapse the individual legs and the tabletop collapses. Try as she might, though, Ginny just couldn't seem to remember anything that might have contributed to her migraines, nor what having a migraine was similar to that may have happened before.

We began tapping on:

as I intuitively directed Ginny to tap different points.

The collarbone point seemed to be particularly poignant for Ginny and after a couple of rounds of tapping, her hand hovered there, covering her throat, while large tears began welling out of her eyes. She stopped tapping suddenly and cried, "Oh god, I remember!"

Ginny went on to relate an incident that, until that point, had not been in her conscious memory since it happened 40-odd years ago. When the weekly rent collector came, eight-year-old Ginny was sent to the door to tell him that her mother was not home, and they would have the rent next week. Her mother hid in the bedroom while this transaction occurred and wept for hours after the landlord departed, with a migraine, leaving Ginny to look after the younger children, prepare meals, and attend to the housework.

As memory returned to her, Ginny recalled that this scenario became a regular occurrence of childhood, and she always felt a deep sense of shame and guilt over what she knew was a lie, that her family would never have the money. We successfully tapped on the various components of this incident and the ongoing scenario, then Ginny remembered something connected, and particularly unpleasant.

The family moved a great deal, always promising the new landlord "next week" when the money ran out, as it frequently did. Ginny was often called upon to deliver this statement, which became so loathsome to her that she pretended she was deaf, and hearing the landlord as if she lay in the bathtub with water filling her ears.

She pretended she didn't hear the landlord's harsh words, garbled as they might be underwater. Most thought her deaf, but one particular landlord didn't buy the act and decided to take out the rent in a pound of flesh, from Ginny herself. He dragged Ginny out of the dark apartment into the glaring sunlight of the street and beat her severely in front of "all the neighbors," who did nothing to help.

She repressed the memory completely by telling herself during the beating, "It isn't really happening, soon I shall wake up." As Ginny related this incident while tapping under her eye, on her inner eyebrow, the top of her head and her wrists (which were held in a vise-grip by the landlord as he beat her), tears rained down her face, and her features, normally schooled into stress-hardened lines, began to soften.

When Ginny had dried her tears, she positively glowed as we tapped on:

As she tapped, it appeared to me that Ginny became more solid, more real, more present in the here and now. It was as if her spirit returned to her. Four rounds of tapping, after the tapping Ginny did while telling her story, reduced the memory to a 0.

Several notes from my file are worth mentioning. Ginny's progress slowed several times and she reported feeling sleepy during our session. While this can be a repressive response when the mind perceives you are getting close to "dangerous" material, I intuited it was something else. Knowing sleepiness to be a symptom of dehydration, we stopped tapping several times during this three-hour session to drink long draughts from the pitcher of filtered water I keep in my office.

I encouraged Ginny to keep drinking large amounts of water, as the energetic impulses we are working with are conducted best through a thoroughly hydrated system. Most adults suffer chronic dehydration, so it's important to keep drinking water before, during, and especially after EFT sessions, when the body may need the extra liquid to help detoxify the system. With each pause to hydrate, Ginny's reflexes and ability to progress further with the tapping picked up speed and her sleepiness diminished. (For more on the effect of water on the energy body, see F. Batmangelidhj's excellent book Your Body's Many Cries for Water.)

There is a lot more tapping for Ginny to do on various incidents from her troubled childhood, but for now at least she has conquered the migraines and the dreamy, "underwater" state that accompanied them.

She now also understands why she felt this way. Now a year later, she is still migraine free. Ginny is learning about EFT, making active use of the Personal Peace Procedure and is well on her way to resolving her issues. Clients like Ginny are ample evidence of the central tenet of EFT, to borrow from the mantra of the Alcoholics Anonymous program: "Just keep tapping—it works!"