Back Pain Relief in an EFT Workshop 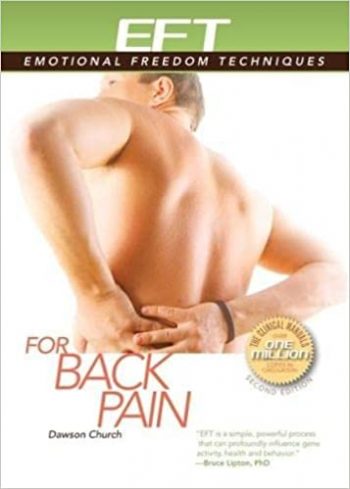 During a 3-day workshop, EFT practitioner CJ Puotinen helped a woman eliminate her back pain, initially at a “22” on the 0-to-10 scale, uncovering a core issue in the process.

In November, I taught a 3-day EFT workshop in New York. At the beginning of the first day, I asked whether anyone was experiencing pain or discomfort. Several people raised their hands and reported headaches, shoulder pain, neck pain, back pain, and knee pain ranging anywhere from 3 to 10 on the 0-to-10 scale. One woman, Cynthia, said her lower back hurt so much that she was debating whether to return home. “On a scale of 0 to 10,” she said, “it’s a 22.”

We tapped as a group on behalf of everyone who was hurting and at the end of EFT’s Basic Recipe, most felt substantially better, including Cynthia. We then tapped for “this remaining pain,” and that brought improvement to everyone. Nearly all of the volunteers were either completely pain-free or close to it. Cynthia’s pain fell to a 2.

Then suddenly her pain rose to a 3. I said, “This is interesting. Cynthia is probably tuning in to a different aspect of her back pain problem.” I asked her, “What were you thinking about when your pain moved up a notch?” She said, “I was thinking that you were probably going to ask me to stand up and see how my pain had changed, and that made me nervous.”

So we tapped on her apprehension about standing up. Soon Cynthia could barely find her pain. I asked if she would be comfortable standing up now and she said yes. She gingerly stood and cautiously bent to the left, right, and back. Her movements were tentative and it was obvious that she expected to feel discomfort, especially when bending forward. “There’s no way I’m going to do that,” she said. I asked, “Are you afraid?” and she said, “Yes!” So she sat back down and we tapped on:

Even though I’m afraid of falling down, afraid of hurting myself, afraid of the pain coming back, I deeply and completely accept myself.

At the end of that round of tapping, Cynthia was delighted to stand, bend forward, and felt much better.

We talked about back pain in general and someone mentioned Dr. John Sarno, the author of several books about back pain. Dr Sarno’s theory is that none of the things that are blamed for back pain, like herniated discs, actually cause it. He shows his patients X rays of backs with damaged or bulging discs and other problems that are supposed to cause pain, but all of them came from people who are pain-free. He says it isn’t the discs or old injuries that cause pain. Instead, he says, the reason your back hurts is because you’re angry.

“Might you be angry about something?” I asked Cynthia. “Yes!” she shouted. “I’m furious!” She said, “I’m 63 years old, way too old to start over, and I’m in real estate, which is going nowhere these days. I have a horrible relationship with my partner of 17 years, who’s an alcoholic. I’m worried about my stepfather, who is elderly and frail. I’m depressed and worried, and I have really serious financial problems.” Wow, that was some list! Everyone in the class could see that Cynthia had several issues to choose from when it came to EFT tapping.

“Which of these would you like to start with?” I asked. “What would you most like to tap for?” She thought for a moment, considering all the options, and then said, “I’d like to tap for my fear of failure.”

Cynthia had just given us a perfect example of a global issue, one that is so vague and general that it might or might not improve with EFT, and if it did, the tapping probably wouldn’t produce a dramatic change.

“Let’s aim for a specific event that has contributed to your fear of failure,” I said. “Think of all the things you’re angry about and give each one a title, like a movie. You don’t have to tell us what they are, but if you feel comfortable sharing one of them with us, the EFT will work a lot faster. Let us know when you have a specific event that makes you angry.”

I had no idea what the Forgery was, but it had to be big and was probably traumatic, so instead of asking Cynthia right away to tell us what happened, we started by taking the edge off, by tapping about the Forgery in general:

Even though I’m so angry about The Forgery that I can’t think straight, I deeply and completely accept myself.

Even though The Forgery makes me furious, I deeply and completely accept myself.

Even though no one can understand the terrible effect The Forgery has had on my life, I deeply and completely accept myself.

After a round of this generalized tapping, Cynthia began to relax. She also began to elaborate. “Here’s what happened,” she said. “My partner, John, forged my signature and cleaned out my retirement account. That’s why I’m angry.” We tapped for her cleaned-out retirement account, for her anger toward John, for the terrible things he did with her money (most of it went to liquor stores), for her anger toward herself for allowing this to happen, and for her fear of a penniless future.

Gradually, the tension in her face relaxed, her sense of humor came back, and she laughed at some of the Setups we used, like, “Even though I’m 63 years old and have one foot in the grave and my life is over, and even though I’ll be homeless for sure, I’ll be living in a cardboard box…” After another round of tapping, I asked Cynthia how she felt. “Well, now I’m not angry anymore,” she said. “Now I feel sad.”

This was a new aspect and one that reflected a cognitive shift. Cynthia was looking at her event from a different perspective. We tapped for everything that Cynthia felt sad about. At the end of that round of tapping, she said, “I don’t feel sad anymore. Now I think about John and I feel pity.”

Cynthia agreed that she was still light years away from forgiving John for ruining her life, but she was one step closer to considering the possibility of one day doing so. This led to a discussion about forgiveness and grudges and how healing occurs. Cynthia agreed that letting go of the pain-producing anger she had brought to the workshop was already helping her think more clearly about her situation, so that she felt resourceful rather than defeated.

Then Cynthia jumped to her feet and said, “Watch this!” She bent her back in all directions and effortlessly touched her toes. Because the workshop lasted for 3 days, we had plenty of opportunity to test Cynthia’s progress. Her back continued to feel terrific and, in fact, felt more and more flexible and free.

On the second day, after reviewing Cynthia’s tapping experience for the class, she was able to tell us the Forgery story without hesitation and without any emotional discomfort. When I asked whether she would feel comfortable telling us how she discovered the forgery, she told us without hesitation how she got a phone call from a credit card company saying that her payment was late and that in fact several months had passed without payment. “I said that’s impossible,” Cynthia told us. “John had been paying all my bills for years and they were always paid on time. But the person on the phone kept insisting that my account was in arrears. I knew there had to be a mistake so I went to my bank and asked them for copies of my recent statements. And there it was in black and white. Most of the checks were made out to a liquor store or to cash. He’d been stealing from me for months. And when he ran out of ready cash, he forged my signature on the retirement account and cleaned me out completely.”

“Yesterday at the beginning of the workshop,” I said, “did it occur to you that you would be telling us about what happened or any of the details about how you learned about it?” Absolutely not,” she said, “I would have died of embarrassment. In fact, I still can’t believe I’m doing this. But it’s amazing. I feel completely comfortable.”

Seven weeks have passed, and yesterday when I asked Cynthia for an update, she replied:

“Since our workshop I have continued to tap twice a day and I am happy to report I am still completely mobile to the point where I have resumed my normal routines at my local gym. If I experience stress moments in between my tapping times, I have progressed my personal path of discovery to the point where I can silently massage the sore spot on my chest (when in public) or go directly to the tapping points that I have discovered are most effective for me, which are under my eyes and on my collarbone, and that helps me stay balanced and focused.

“I tap in the morning and at night. The morning ritual is just for me. My evening tapping is as much for other people, and it takes place after my quiet time of prayer and meditation. This tapping is done on a vision board of family and friends. I tap for all of them but especially for those who are physically or mentally struggling. Also on that vision board is my daughter’s cat, Bubba, whom you might remember from the first workshop I attended last year, when I asked everyone to tap for him. Well, Bubba is still alive and going strong, and the vet has dubbed Bubba the miracle cat.

“To be honest with you, I don’t think about the forgery at all anymore. There is no anger, resentment, anxiety, or now that I am specifically trying to think of it, no feelings whatsoever. It’s almost as though all emotion about the forgery has been erased from my mind. It’s merely something that happened. How great is that???!!!! Thank you, CJ.”