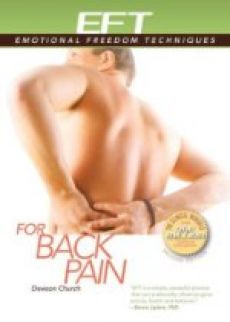 This was my third session with Gary and his understanding of EFT or Energy Psychology was limited. He believed that these modalities were used with people who were very emotionally upset and having a hard time moving forward with their lives. His concept of these modalities did not include working on pain that had been in the body for many years.

When we started our third session, I asked Gary what he wanted to work on and he said that he really didn’t know, but he knew that he should be using EFT because he felt so good the first few times he had used it.

I asked Gary if he was experiencing any pain. He related that when he had been sitting on the beach recently and then tried to stand up, he fell over because of a severely sharp pain in his left knee. There were other people on the beach who saw that happen and he felt like he looked stupid. So I asked him what the SUD level was on the feeling of looking stupid. He said 7.

We tapped a couple of rounds using phrases like:

I felt so stupid when I fell.
I can just imagine what others thought.
I should have been able to foresee that and been able to avoid it.

After just a few rounds, I saw Gary’s expression change. He then said that the pain in his knee was a 9. I asked him what he was thinking and he said, “The pain is purely physical, I’ve had it for a long time, and we cannot tap it away.”

Since his reply was so direct, rather than trying to find any other feelings or information, we tapped a couple of rounds just using his statement.

Gary was greatly surprised after those two rounds when he checked the pain level. He exclaimed that the pain at that moment was only at a 5 and that was the lowest it had been in years without taking painkillers. He was eager to proceed further.

I asked him what had originally happened to his knee. He told me that he’d had knee surgery about 20 years ago and his doctor had told him he would have to take painkillers for the rest of his life to deal with the remaining pain and that there was nothing else the doctor could do about it.

“And the doctors have not been able to do anything with it since?” I asked.

He said no and that he used painkillers quite frequently so that he could manage the pain throughout his day.

I then asked for details of the accident. He said that a coworker had accidentally hit him with the forklift he was driving. One of the forks had hit Gary in the back of his left knee.

I asked him how he was feeling about that as he told me. He said that he felt extremely unsupported by his coworker. He also said that he was very angry because this shouldn’t have happened if the operator had been paying attention. So I asked him to rate those feelings and he said they were both at an 8 and that he didn’t understand how the operator of the machine did not see him.

We tapped a couple of rounds on those phrases:

I feel so unsupported.
I don’t know why he couldn’t see me.
I am so angry at the operator.
He was not paying attention to his job.

Gary started yawning before we finished the second round, so I questioned him on what was shifting for him. He said there were reasons why the forklift driver had been unable to see him. “I remember that it was very sunny that day and that the sun could have blinded my coworker and I also remember that it was very busy in the yard. I’m thinking the operator had a lot of issues to face that day, was very busy like the rest of us, and most likely was doing the best he could.”

I then asked Gary to assess the pain in his knee. He stood up and moved around for a while. Then he said it felt like he’d had a knee replacement and he could only feel a slight twinge when he moved. He exclaimed that he felt like a brand-new person without the pain.

I talked with Gary about this issue a few months later. He said that only once in a while did he feel a little twinge in his knee if he had been sitting for too long; otherwise he felt great.