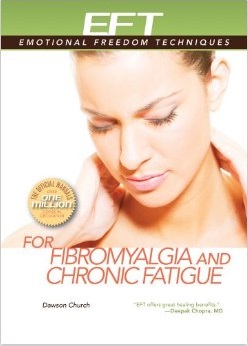 A long-time client called recently regarding her cousin Natalie, a 42-year-old woman who had had pain throughout her body for several months. She had been to several varieties of doctors who had prescribed many drugs - antibiotics, pain killers, and eventually steroids – and other techniques but she was still suffering to the same degree.

Natalie had gotten to the point where she was having trouble getting out of bed to run her thriving company, so when she called me herself we made an appointment. I will add that Natalie entered my office very warily. I had sent her information on EFT tapping asking her to familiarize herself with it. She told me she had done as I asked, but to her it sounded just weird.

It was obvious she had agreed to this visit for two reasons only - she was desperate and she trusted my client, her cousin.

We began tapping immediately on her pain, which that day was a SUD Level of Intensity of 7 on the zero to 10 scale. After a couple of tapping rounds I asked her, as is my usual custom, if any thoughts had come to her while we were tapping.

In my experience, I’ve found our minds are like computers and that EFT opens a file in the computer/mind.

If I ask my client what thoughts come to them while tapping, this file will often give information helpful in coming to the root of the problem.

Natalie replied that as we tapped she was reminded of her 17-year-old cousin’s murder that had occurred 25 years earlier, so I trusted this incident was somehow related to her pain. I asked her how she felt about what happened to her cousin and she immediately began sobbing.

We kept tapping as she began spewing words and feelings that had been pent up for many years.

She related that her cousin had come for a summer visit when they were both teenagers. Her cousin had found a boyfriend who was part of a wild crowd and had begun sneaking out at night to meet them. Natalie didn’t join her cousin but kept the secret and now was riddled with guilt because one night her cousin hadn’t come home.

We continued to tap as she cried and talked.

After a while she began to be angry. Natalie and her family were sure they knew who had killed her cousin, but the police had told them there wasn’t enough evidence for an arrest or a conviction. She was angry at the boyfriend for not protecting her cousin. Most of all, though, she was angry with herself for not having confided in someone about her cousin’s late nights.

We tapped through the anger, then focused on the frustration at her perception of the inept police and the refusal of her cousin’s “friends” to speak up and identify the perpetrator. We tapped on the helplessness she had felt for years due to her inability to get justice for her cousin. After about an hour, Natalie looked and felt utterly exhausted and I knew it was time to stop.

We did tap for a few minutes on her exhaustion so she could safely drive home. We made another appointment two days later.

When she came for her second session she was beaming. She said she had not had another moment’s pain after our work together. I will hasten to add that it’s not always the case that such extensive pain will go away in one session but for her it did.

We still have work to do on the many aspects of her cousin’s murder. And we’ll go on to explore how this 25-year-old trauma has affected her life and what decisions she’s made because of it that negatively affect her now.

The difference is she’s excited about the “weird but wonderful” (her words) practice of tapping.