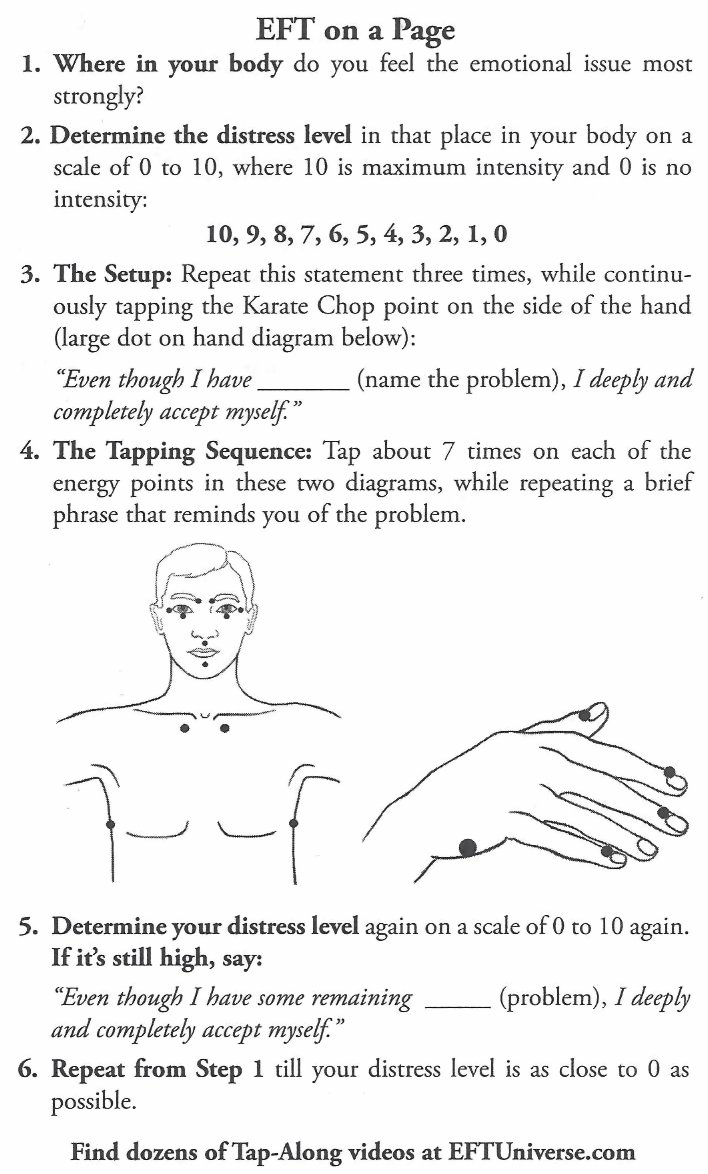 When Steven contacted me regarding getting help with his ED, he explained that he had been married for a very long time, was now divorced, and recently had a new woman in his life who he loved dearly.

Everything was perfect except that they wanted a very active sex life and he was having problems getting and maintaining an erection which made penetration unpredictable or impossible.

Other aspects of their sex life were wonderful and satisfying (this is always helpful as it takes some of the pressure off), but they both wanted to be able to enjoy intercourse.

He had tried medication, both Cialis and Viagra, but neither of them worked for him.

Steven was in excellent health, strong and fit. He told me he had a sense that this issue was caused by his thinking.

Below I will outline how we proceeded in our work. Steven was a terrific client, open and honest about his feelings and willing to do homework tapping. He really took this on as something that was very important to him. In all we had 10 appointments.

Here is what he wrote at the end of our work together:

“Thanks for helping me completely rebuild my sex life. I could not have done this without your insight, coaching and guidance. You carefully led me through clearing a series of issues that had completely frustrated me for many years. Over the course of three months you helped me dissolve a series of problems that I had built up over a good part of my life. I cannot thank you enough for the joy you brought back into my life. I believe you could help anyone who wants to regain their full sex life. Thanks again!”

We Begin: During our initial consultation Steven told me that his ED problems started in the waning years of his marriage, but he also said that he thought the cause was “in his mind” and came from “early childhood stuff.”

I really make note of what clients say in the initial phone conversation as that often is a good pointer of where to start.

We talked about his feelings: “ashamed, frustrated, scared to try intercourse, fear of failure” and noted where in his body he felt these things (nauseated stomach, catch in the throat) and got an intensity level of 7/8.

We tapped on “I have trouble having intercourse” and “humiliation” came up as a feeling.

This led us to the fact that during the last years of their marriage his ex-wife was capable of saying mean things. We tapped on some of the specific things she said to reduce their charge.

NOTE: I explained to Steven that over years and years we accumulate this stockpile of negative energy from events in our life and, trying to be strong, we do nothing to release this energy. It stays stuck in there.

I encouraged him to think of EFT tapping as a way to shake that old stuck energy loose and let it just flow out of his body. Every time we tapped or he tapped on his own, he’d be chipping away at the old yucky energy.

When I inquired, Steven said he’d tapped every day since our last session and he noticed that he had a problem with loving and accepting himself unconditionally. This turned out to be a most valuable piece of information for his healing ED.

Despite many accomplishments, he felt “I’m not worthy, I’m not a good person” and felt this got cemented in place when he was a teenager.

We tapped on the physical feelings: a rock in his gut that represented sadness and frustration. More inquiry about specific events revealed that though there were no catastrophic events, there was a constant feeling of trying really hard all the time to earn his Dad’s love and attention. A feeling of “never doing enough to deserve love.”

We worked on specific events from his childhood regarding his Dad, especially events where Steven felt neglected and lonely. Feelings of “I’m not important” and not being seen despite trying so hard. In this session we did a Matrix Reimprinting session where Steven was 6 years old when a new baby at home made him feel “invisible, alone, lonely.”

Steven comforted his young self (his echo) and told him, “You haven’t done anything wrong” and “You are a terrific kid” and “ You are lovable just the way you are” and “It’s not your fault, you didn’t do anything to cause this.”

This was a very emotional session and Steven had an intense feeling of release.

To get a reading on where we were, I asked Steven to say this statement and let me know how true it felt to him: “I’m not worthy, I’m not a good person.”

He said it had changed a lot in the last few weeks and felt only 16% true. We worked on more specific events from his younger years: a move to another state and a new school. More of feelings of being alone and afraid to not fit in. For homework I asked Steven to think about the thing his Dad said that felt worst to him.

At the beginning of our session Steven said, “I feel like the difficult things are eroding.”

Regarding his homework, he said that there was nothing Dad said, it was what he did not say, i.e., being ignored by Dad. I asked him to close his eyes and picture his Dad ignoring little Steven. His SUDS level was a 5.

As we tapped the rock in his stomach turned soft and his SUDS went down to a 1.

I checked this statement with him (noticed it is reversed from earlier): “I’m a good person” and he said it felt 70% true now. He also said that the ANXIETY he felt was like “an electric motor hum in the background all his life.”

Now it felt quieter. (Notice that we have not worked directly on his ED problem except in Session #1.) In this session we discovered, through tapping and inquiry that he was constantly “trying to please everyone”. It was a revelation to him that he had this strong “perfectionism” going on.

NOTE: Think of all the pressure we put on ourselves and the anxiety we create inside of us when we want to be perfect and please everyone. Anxiety is a real problem/cause of ED.

Now I thought it was time to address the ED more directly. I checked for limiting beliefs by having him rate the “trueness” of these statements: “Sex is a performance”, “The Man must orchestrate sex”, “The Man must always want to have and be ready for sex”, “Sex should be spontaneous” and several others.

We talked about these beliefs and the idea that it was really The Couple (not The Man) who is responsible for how it goes. This is called a reframe.

Checked to see if there were any issues/resentments with his current partner; there were none. Steven said his erections were still unpredictable and felt a “mental inhibition.” I had him say: “I deserve a terrific sex life” and he immediately said “No.”

I checked for secondary benefits to not having reliable erections… what might this give him? He was able to identify that he felt guilty. He’d been married and promised loyalty to his wife and promised never to leave. He felt like a bad person for leaving.

We tapped on this aspect and I gave him homework tapping.

I checked “I deserve to have satisfying intercourse” and that was 100% true. We did more tapping on “I didn’t keep my commitment to my wife and I feel bad about myself” until it was down to 0 SUDS level.

Then we focussed on all the effort he put into making the marriage work and forgiving himself for disappointing his family, his ex-wife and his kids. He reported that now the Cialis and Viagra worked and the the “intimacy level was terrific”. We focussed on positive expectations and sending more energy to his groin and penis to sustain erections.

For homework I asked him to think about where this energy would come from?

Steven reported that the “trajectory is really positive”, “major major changes” and that they’d “had intercourse for 4 nights in a row following our last session.”

This let me know that it was not too soon to start going toward the positive (as we did in our last session). Regarding homework question, he said that the energy would come from “heart emotion” and an “attitude of enjoying a challenge” which he identified with from his days of competing in sports.

He felt energized by the thought: “Oh boy, let’s see if we can do this!” and felt he could apply this attitude to his positive EFT tapping.

He would summon the energy/force from all over his body. In the rest of the session we worked on more specific events from childhood using the Movie Technique. Steven realized that as a kid he had felt “resigned." That “this is the way it is and there is nothing I can do about it.”

This was very emotional for him and a real insight about how this “resignation” had influenced the way he handled a lot of situations in his life.

Yes, we had this scheduled but it only lasted 10 minutes. He said he was having regular intercourse, sometimes with and sometimes without medication.

That his mental state felt altered; resignation never enters into his thought process; feels “present” now instead of dwelling in the past; feels very efficacious now and “a lot of the ‘static’ that was in the way is gone.”

It’s a lot to read, but if you are enduring sexual problems, it may be helpful to really see what the process can be to resolve them. Sometimes it looks like an indirect route, but once we feel more self accepting and less self critical, often sexual problems resolve quite easily.