EFT for PTSD from a Car Accident 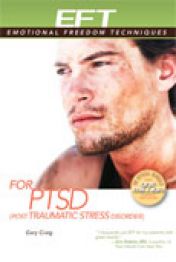 Nancy Linnerooth is a certified EFT practitioner, licensed marriage and family therapist, and career coach who specializes in helping people get rid of their internal blocks to professional success. In this article, she relates how she used three EFT techniques to resolve a client’s panic attacks and other PTSD symptoms after a serious car accident.

“Judy” (I have changed her name and some of the details of her situation to protect her confidentiality) came to my therapy practice suffering from PTSD so severe she had not been able to work for more than a month. She had been in a car accident during which she thought, “You’re going to die.” Since then, despite not having much physical injury, she had suffered from nightmares, flashbacks, panic attacks, and uncontrolled crying. With all of this, she was getting little sleep.

She felt out of control.

Judy reported that there were no traumas in her past nor mental illness before this. I suspected that our work together would be a straightforward application of EFT to the accident itself, with little or no need to go into previous events. Of course, that remained to be seen.

The initial, or intake, session was taken up with paperwork and getting a history appropriate for insurance purposes. I taught her a deep breathing exercise to help her relax and explained that the panic attacks she was having were the same as the fight, flight, or freeze reaction.

I advised her to talk with her lawyer before we proceeded, so she would understand the legal ramifications if we did get rid of her PTSD symptoms. At our second session, Judy reported that her lawyer had told her just to get better.

When she came into the room for our second session, she was visibly distressed, her face drawn and her shoulders hunched. Over the weekend, she had changed her medications and had slept very poorly for the last two nights, having wave after wave of panic attacks in the middle of the night.

I decided not to give her an example of how EFT works by using a memory from at least five years ago, which I’ve found works great for getting clients invested in the process so they keep going even when their current issue takes more than a session to resolve. Instead, I walked her through the tapping points and we started right in on what she was currently experiencing.

We began with Chasing the Pain:

The right side went down from a 4 to a 2 without tapping directly on it. The SUD level stayed there for another round, so we worked on the nausea she was feeling and brought it from a 5 to a 3 to a 2 before moving on to the emotions. By the end of the session, the nausea was at 0 and the right shoulder was a 1, although the left shoulder stayed at 4-5.

After taking the edge off the physical pain, I used the Movie Technique to be as gentle as possible with Judy. I asked her to think of the car accident as a movie and give it a title. We worked for about half of the session bringing the numbers down for both the anxiety she felt and the physical sensations that went with it.

“Even though I have this anxiety and tingling in my stomach from my Crash Movie…” At this stage, I often added “and I’m safe” after “I deeply and completely accept myself” as a reminder of where she was—in my office, not in her car.

I also reminded her frequently not to run the movie yet and to keep her eyes open throughout the session to avoid getting drawn into her memory, since that is a danger with PTSD. We chased the pain around quite a bit, bringing the tingling from 5 to 0, her rising body temperature from 4 to 3 to 2 to 0, and her nervous stomach from a 5 to a 2-3 to a 2. Her anxiety came down from 8 to 7 to 5.

Then it seemed to plateau.

After the Setup, I guided her through her comments about the past weekend and its waves of panic as Reminder Phrases while we tapped through the points:

“I thought it was getting better.”

“Sunday night I knew it was coming.”

During this session, I did not uncover any core issue underneath the presenting issue of the accident. Once we have spent some time going through the memory of the accident with the Tell the Story technique, which I intend to start at our next session, I will look for anything that might be underlying her strong aversion to being out of control.

As help between now and our next session, I suggested that, whenever Judy felt a panic attack starting, she tap on whatever points she could remember, particularly the Under the Arm point, which she liked.

I reassured her that she did not have to remember all the points or even say anything while tapping. Given the severity of her PTSD, I did not encourage her to work actively on the memory of the accident; she was not yet ready to do this without guidance.

Before ending the session, I checked all the numbers of the physical sensations and the title of her movie to see that none had gone back up. Most had stayed the same or gone down even further. I pointed out the progress she had made.

She looked pleased and even laughed on her way out the door.