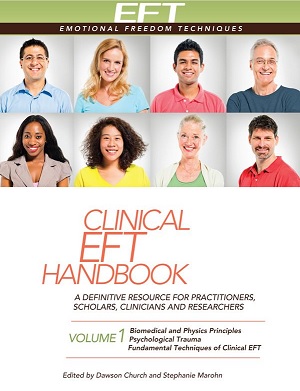 One of the most profound discoveries in EFT in the early part of the twenty-first century was the phenomenon called "Borrowing Benefits." It's the discovery that simply watching someone else do EFT on their issues, while tapping along with them, can help you reduce the emotional intensity of your own issues.

Borrowing Benefits was first noted by EFT practitioners. They reported that, rather than feeling exhausted after a day working with clients, they were energized. Their own emotional problems seemed to have melted away, even though they weren't working on the same issues as their clients.

This might seem hard to believe at first, because it doesn't apply to most other methods.

Talk therapists don't usually find their own anxiety or depression improving after working with clients. Social workers don't find their problems melting after a day of work. The reverse often occurs, as they take on the emotional burdens their clients are processing. The rate of burnout among helping professions is high.

You don't get the benefits of meditation by watching other people meditate. The problems of life coaches aren't necessarily resolved when they help their clients resolve their own problems with motivation, accountability, or goal-setting.

Yet, just watching EFT sessions, and tapping along on your issues, can produce lasting change.

The first study to examine this phenomenon was performed by Jack Rowe, PhD, then a professor at Texas A&M University. He examined the mental health of 108 people attending an EFT weekend workshop. He tested them a month before the workshop, and immediately before, and found that their levels were unchanged.

But after the workshop, they had improved dramatically, even though they were watching sessions performed onstage. They retained a part of the improvement when Dr. Rowe tested them at subsequent intervals.

The Rowe study was replicated and extended in a second study by a research team that included me, and Audrey Brooks, PhD, a professor at the Psychology department of the University of Arizona at Tucson. We looked at mental health symptoms in 218 healthcare professionals such as doctors, nurses, psychotherapists, chiropractors, and alternative medicine practitioners.

The subjects were attendees at 5 professional conferences who attended a one-day EFT workshop.

At one of the conferences, EFT was offered by one EFT expert, and at the other 4 by me. Participant mental health improved significantly at all 5 conferences. As we measured their symptoms during a follow-up period, we discovered that they retained most of their gains. We also tracked whether or not participants used EFT after the workshop, and found that those who did more EFT got better than those who did less EFT.

A later replication of the study examined workshops taught by EFT Masters, such as Ann Adams, Loretta Sparks, and Carol Look.

It reinforced the same findings, and showed that EFT is effective regardless of which EFT expert offers the workshop.

This makes three studies to measure the effects of EFT in hundreds of people, and provides compelling evidence for the effectiveness of Borrowing Benefits.

You can receive the emotional advantages of Borrowing Benefits by attending an EFT workshop. You can also use the videos on this site. We've recorded a number of sessions that you can simply tap along with. Go to the video page, choose a session, and tap along.

1. Pick an issue you'd like to work on. Write down a brief name for the issue in 1 to 3 words.

You'll usually find your number dropping substantially. If it doesn't, then pick another specific incident in your life most identified with that feeling in your body, and repeat the process.

The tutorials on The Importance of Being Specific and finding Aspects will also help you unearth events linked to the issue.