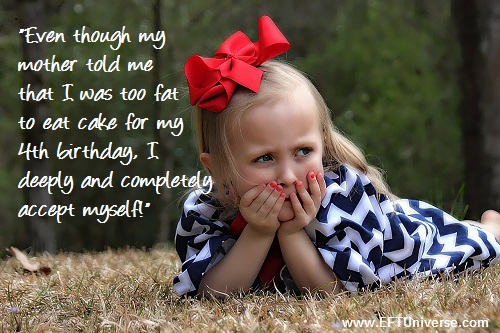 During the EFT for Weight Loss Live-call Events, I emphasize the importance of finding specific events to tap on.

I drive home the point that focusing on specific events is critical to success with emotional freedom techniques.

In order to release old patterns of emotion and behavior, it's vital to identify and correct the specific events that gave rise to those problems.

When you hear people say, "I've tried EFT and it didn't work," the chances are good that they were tapping on generalities, instead of specifics.

An example of a generality is "low self-esteem" or "depression" or "willpower problems."

The person with low self-esteem might have been drawing something new at the age of 4, when her mother looks at the drawing then dismisses it, telling her that she can do better. She may have had a mother who excessively criticized her no matter what she did, or how hard she tried.

Then she may have experienced a school teacher who never acknowledges her work in class and never calls on her when she raises her hand. A third event might be her best friend abandoning her in middle school for "more popular" girlfriends while the boy she has a crush on asks someone else to the school dance.

Together, these specific events contribute to a global pattern of low self-esteem.

The way EFT works is that when the emotional trauma of those individual events is resolved, the whole pattern of low self-esteem can shift. If you tap on the big pattern, like low self-esteem, and forget the specific events, you are likely to have limited success with EFT and tapping for weight loss.

When you think about how the big pattern, like low self-esteem is established, this makes sense. It's built up out of many single events. Collectively, they form the whole pattern.

The big pattern doesn't spring to life fully formed; it's built up gradually out of many similar experiences. The memories engraved in your brain are of individual events; one disappointing or traumatic memory at a time is encoded into your memory banks. When enough similar memories have accumulated, their commonalities combine to create a common theme like "poor self-esteem."

Yet the theme originated as a series of specific events, and that's where EFT can be most effectively applied.

Below a generality like, "My mother didn't nurture me," you're bound to find a whole slew of individual events. One of these might be a mother saying, when she was planning a birthday party, "You're too fat to eat cake. If you don't lose some weight by next week, I might not even going to bother ordering one for you."

Later on, she may say things like, "You'll never attract a man unless you skinny up."

Cumulatively, these give you the message that your mother didn't nurture you. Therefore, you might today fail to nurture yourself, internalizing your mother's behavior. Yet this general problem has it's roots in those very specific events that you really never forget.

The good news is that you don't have to tap on every single event that contributed to the global theme.

Usually, once of the few of the most disturbing memories have lost their emotional impact, the whole emotional pattern disappears. Memories that are similar lose their impact once the most vivid memories have been neutralized with EFT.

Tapping on global generalities is the single most common mistakes newcomers to EFT make when tapping.

Using lists of general tapping phrases from a website or a book, or tapping on generalities, is far less effective than tuning into the events that contributed to your global issue, and tapping on them specifically.

If you hear someone say, "EFT doesn't work!" the chances are good they've been tapping on global generalities rather than identifying specific events.

List your specific events, one after the other, that stand out most vividly in your mind when you think about your global pattern. Tap on each of them, and you'll usually find the global problem diminishing it of its own accord.

"Even though my mother told me I was too fat to eat cake before my 4th birthday, I deeply and completely accept myself."

The "generalization effect" is one of the key concepts of EFT and as you tap and a specific painful memory and your SUD Level of Intensity score on a scale of 0 - 10 drops down to zero, the benefit generalizes to other similar memory events from the past. Your SUD Level might reduce for the similar memories on the same theme even though you haven't yet tapped on them.