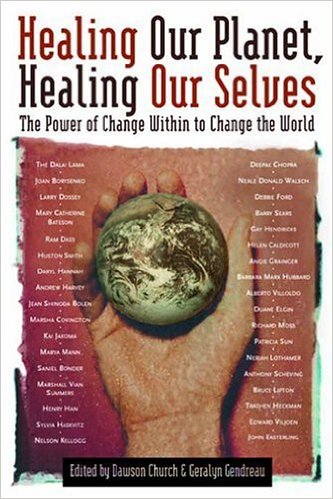 My gratitude for EFT has never been more persona–last week it literally saved my life!

More than a decade ago, I suffered a terrible allergic reaction from a lawn recently treated with fertilizers, pesticides, and herbicides. The reaction I experienced came on over several hours, growing steadily in intensity. The doctor said my reaction was called “anaphylactic shock” and that I was very lucky to have caught it in time.

Living in New York, sadly I don’t often find myself lying about on lawns, so I didn’t give the issue another thought, especially since we were told that this particular lawn treatment was generally not used under normal circumstances. There have been no other reactions since that time … until last week.

While working out of my Florida office, I decided to take a long lunch break and lie out in the backyard. For some reason, the lawn looked so inviting and I spread my towel and enjoyed a relaxing hour.

Less than two hours later, my family arrived and noted that I’d had too much sun. Very fair skinned, it was not surprising to me that I’d appear red. At their first comment, my skin was not even burning, so I continued working in the kitchen.

From the time of the first comment until my skin began searing was less than 15 minutes. The sting began to build, so I grabbed a little lavender, applied it directly on my face and began to tap for sunburn. Usually, lavender really curtails a burn, so I was immediately alarmed when the pain just kept growing in intensity and area, for now my entire body was burning. By the time the pain reached my arms, I was using EFT for: this emergency, this terrible burn, this bad reaction.

As the pain and symptoms continued to mount, I realized that something was terribly wrong, so I shifted my perspective to:

Even though I am having a terrible reaction, my energy is all out of balance, I completely and fully love and accept myself and I trust that my body is healing now.

I kept working on balancing, but when I felt my lips swelling, I stepped in front of a mirror to see what the issue was and was completely shocked: my lips were swollen and white, my skin was blotchy red and white with very large hives, and I was beginning to sway and lose focus.

My sister asked what she could do and we both tapped for each of the symptoms and maintained focus on balancing my energy and that I was healing now.

Even though I’m having a severe reaction and we’re scared, immediately the cause and the answers become apparent and my body does all it needs to heal now.

Using EFT, we went thru a list of possible items–what I ate, drank, any medicines–and nothing specifically resonated, yet I knew that until I got to the specific issue, all the EFT balancing and clearing was supporting my ultimate healing.

Though I was in bad shape and we were deciding about calling 911, we were both shocked when her husband came into the bedroom, magically giving us the exact thing to tap on by asking, “Hey, Cath, it couldn’t be the lawn fertilizer, could it?” With that, my sister and I both said, “Anaphylactic shock!”

Before we could tap again, I was violently ill. I was acutely aware that my body was expelling anything that was making me ill. And between bouts, I drank as much water as possible. My sister maintained tapping on me while I was ill, God bless her heart!, and a few moments later I was back in bed with terrible cramps.

We spent the next series focused on:

Within 10 minutes or so of these EFT rounds, the hives and redness had already begun to subside and the cramps also stopped. We both agreed I didn’t need to visit the hospital. I then spent the next three hours sleeping deeply.

When I awoke, I was clear and totally symptom-free. My appetite intact, I sat down and ate a complete dinner and enjoyed a night of TV with my wonderful family.

While there may be an underlying emotional cause to these reactions, I’ve yet to find the connecting link. There were no traumas that I could find, no fights or disagreements. There’s no clear reason why for the last decade I’ve been able to sit on the lawn at our local waterfront parks without reaction, but lying on a towel on this particular lawn almost killed me.

Still, knowing what I know now, I have been working with EFT to clear any possible emotional causes regardless of their origination point. Some day the reason may come to light, or I may never recognize what traumas I am clearing connected to this allergic reaction. What I do know is that EFT saved my life, or at the very least saved me a nasty hospital visit where I’d have been pumped with adrenaline and steroids. And I’m fairly certain that should I encounter these chemicals again, I’ll either not have a reaction at all or I’ll be able to curtail their effects just as I did last week.

What a comfort to know that even in a state of emergency not only does EFT really work, but it’s also now become second nature to me and comes to my aid without concerted effort! It’s most certainly due to all the hundreds of hours of casework and self-practice that EFT comes to light so easily, but also that my energy was clear enough to help my body heal so incredibly fast!