How to Overcome Motion Sickness With EFT Tapping 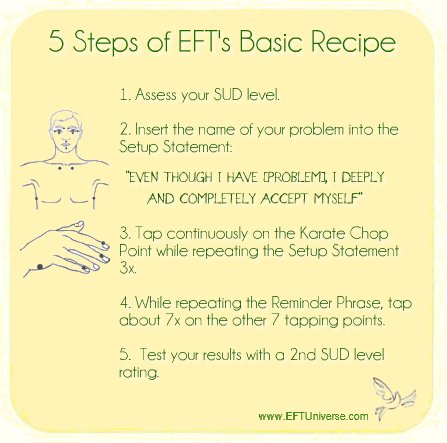 Motion sickness is caused by disordered signals sent to the brain between the balance-sensing system which is comprised of the ear’s semicircular canals, vision and sensory nerves.

One of my clients, a single mother of four, happened to mention at the end of our last therapy session that her 7-year-old son consistently vomits when he rides in a car and when he travels on airplanes.

She permanently kept vomit bags in the car for him.

At this point in therapy, I hadn’t yet shared EFT tapping with her. We’d enjoyed a good rapport and I had also seen some of her children about small issues that had come up for each of them.

Therefore, I didn’t hesitate to tell her that I would like to see her son after his return from his latest trip. I told her I was certain I could help him cure his motion sickness. (Note this is a strong statement for me to make. I have never told a client I can “cure” or “fix” their problem. With my experience and confidence in EFT, and with the problem she presented, however, I didn’t hesitate to present this concrete statement).

My only concern was whether he would be able to access the motion sickness feelings during therapy.

I told her if he didn’t stop vomiting in the car on the way to the session that I would have her take us for a ride together over the nearest mountain so I could teach him the tapping process as the feelings occurred.

“Jason” came to my office the following Saturday. He used his hands in each case to rate his SUD level of intensity number between 0 – 10. He first described his feeling as “dizzy” with a high SUD rating of 9.

“Even though I have this dizzy feeling, I really, really love myself!”

After two rounds of tapping, he was at a 0 SUD level (hands together).

I checked for another feeling and he told me, “This sick feeling” which also was at a high SUD level number.

“Even though I have this sick feeling, I deeply and completely accept myself.”

After two rounds of tapping, his SUD level dropped to a 0. I checked again for another feeling and he stated, “This throw-up feeling” was another high SUD number for him.

“Even though I have this throw-up feeling, I deeply and completely accept myself.”

After one round, his SUD level was at 0. He didn’t report any further distressing feelings or thoughts.

With Jason in the room, I briefed his mom and told her he would teach her the process of tapping. I sent him home (over the mountain) with a picture drawing with the seven tapping points labeled and tapping instructions. (Just a side note, Mom did mention that her friends alluded it was impossible for me to fix his motion-sickness problem.)

Mom works near my office and came in unexpectedly to speak with me. She excitedly exclaimed the tapping had worked for her son’s motion sickness. She told me upon leaving my office after the last session that Jason began to experience his normal car sickness while driving home.

She watched from the rear-view mirror as his face turned pale.

He leaned back in the seat and quietly started rubbing the NLR spot (“sore spot”) for about 2 minutes. She said he remained quiet and she thought he didn’t say his tapping statements out loud to avoid being teased by his siblings. She then noticed he sat up on the edge of his seat, noticeably more alert, and began tapping on the tapping points.

After one round of tapping, she said that the color returned to his face and he looked fine, to which he promptly complained about his siblings taking his balloon, as if nothing else had happened while riding in the car!

He now has the confidence to ride in cars and airplanes knowing he has this tool available to him anywhere at any time and that he can control his motion sickness.