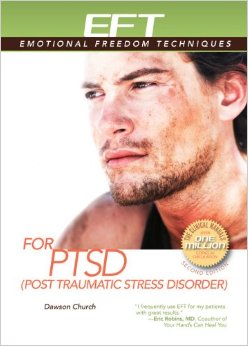 One of my problems is depression. In fact, sometimes I think I love it.

Depression can, of course, be living hell; I have experienced, off and on, that debilitating and petrifying psychological state for, evidently, a number of years. While recognizing depression to be unhealthy and perhaps even unnecessary (when I’m up), when I’m down, I’m submerged in that old familiar feeling of hopelessness.

Having recently been unable to fall asleep and instead remaining awake in bed essentially all night long, becoming ever more depressed and deeply submerged in terrifying thoughts and futile struggles with insurmountable obstacles, the idea occurred that since I was evidently destined to stay awake that night, I might as well try EFT tapping on some of those insurmountable issues.

Anything to pass time.

Not wishing to wake my wife, Loretta, I decided to just imagine, as firmly as I could, the tapping sequence. I had done this before with what I considered to be frequent success.

I began to process one problem/malady/issue after another, but there were always more and deeper issues. It sure was a good thing EFT requires one to concentrate on the problem, I thought. I was so down I only wanted to descend down further to visit my old friends, those frightening thoughts. I seemed to be getting nowhere, except that I now had more bad things to think about while I was awake.

Then, another thought occurred: why not try tapping on “Depression?”

Sure, general depression was usually the result of a complex conglomerate of unpleasant issues and stressors, but maybe depression was also a single issue. Lord knows, I loved it at times for just what it was and actually could get depressed thinking about not being depressed. So, depression was treated as a single-issue problem. Below is roughly the wordage I used. I didn’t get to sleep, as dawn broke, but I did eventually get up seemingly refreshed and not depressed.

“Even though I’m sometimes depressed, I accept myself deeply and profoundly.”

“Even though I’m depressed most of the time, I accept myself deeply and profoundly.”

“Even though it seems I’m depressed all the time, I accept myself deeply and profoundly.”

UE: “I’ve never been so depressed!”

UN: “I’m so depressed I can’t get depressed enough.”

CB: “Depression’s the only thing worth living for.”

UA: “Why isn’t everybody depressed?”

TH: “Everybody should be depressed; I’m depressed.”

IF: “With this world, how could I not be depressed?”

MF: “Depression’s the only hope.”

LF: “This night’s been miserable because of this depression.”

CB: “Wouldn’t have it any other way.”

UA: “It’s been too long since I’ve been depressed.”

TH: “Think I’ll go down deeper into this delicious depression.”

IF: “What’s the point of anything?”

MF: “What’s the point of being depressed?”

KC: “Depression lets everyone know I’m just thinking about myself.”

Don’t ask where I got that; I just do it. It’s a simple procedure that I like to think “wakes up” my whole brain, nervous system, and body, as in: “Wake up, me; we’re going to try to communicate with the rest of the universe now.”

So there you have how I delt with my depression with the help of EFT!