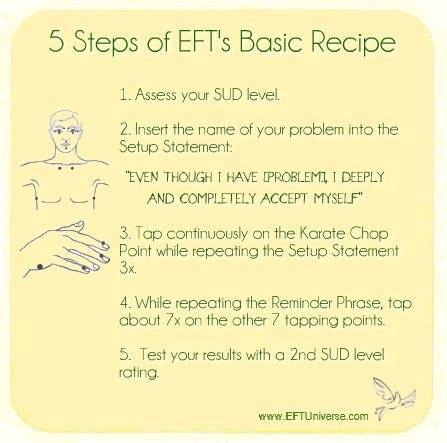 I work with students that have dropped out of school in the past who wish to return to school and complete their education.

Most of my students have an unbearable fear of math. They tell me how they hate math, have never been good at math, can’t learn math, etc.

EFT tapping has become a blessing for many of them. It has reduced or eliminated their math phobias and they have begun to incorporate it into other aspects of their lives.

“Marcia” (alias) was raised in an abusive family where her stepfather consistently told her that she was “stupid.” Her mother was verbally abusive as well. Marcia struggled with her schoolwork and rarely received positive assistance with homework. As she progressed through school, her resistance to and fear of math became her greatest obstacle.

Her fifth-grade teacher, “Mr. Tony,” embarrassed her in class by reinforcing the fact that she didn’t know her multiplication tables. At each turn in school, she felt defeated because she couldn’t learn math. She began to hate school and all that it represented.

She ultimately found work where she was successful and she believed that this was her correct path. She went on to become a store manager for a drugstore. She made very good money and was happy. However, there was regret that she had never earned her high school diploma.

When Marcia started taking GED classes, she took an entrance exam. Her reading score was good; however, her math score was very low. At intake, we discussed her scores and she expressed a hatred for math and said that she had tried many times before to learn it, but had never been successful.

I asked her if she would be willing to try something a little unusual in order to learn math. She said that she would try anything. I said that we would give her time to get used to the class and me before trying this new method.

I gave her a few weeks to get familiar with the classroom, the books and materials, and me. Then we began to use EFT.

Over the next few days, we used several Setups and Reminders. The following are some of the phrases we used. When we started, her SUD level of intensity about math was 10 on a scale of 0 to 10.

Even though I hate math and it hates me, I love and accept myself; I choose to learn to make math fun.

Even though I never got any help at home, I choose to take control of my life and learn math.

Even though my stepfather told me that I am stupid, I love and accept myself; math is becoming fun and I am learning to like it.

Even though Mr. Tony embarrassed me because I didn’t know my math facts, I choose to love myself as I am; I forgive him for hurting me; I understand that he couldn’t be perfect, just as I am not prefect; I am learning to like math and am successful in math.

Marcia’s SUD level of intensity about math came down to 2 out of 10, and her ability to remember math facts and solve problems went from a 2 to 8 out of 10. She was finally learning math.

I have two quotes in my classroom that I repeat on a regular basis to my students and I believe that they helped her as well:

“Your consistent thoughts become your reality” and

Marcia now states that she really likes math and it is fun to learn. In addition, her scores have improved to the point that she is ready to sit for her GED exam and she should pass it.

EFT tapping has made a real difference in her life.

She is not the only student that has been impacted by EFT. Most people with school issues suffered an insult by a teacher in the early years, usually fourth grade. Many have parents or other relatives that told them that they (the parent) couldn’t do math or another subject either, so it was expected for them to fail. Testing has also increased the ranks of school haters. EFT can end years of suffering and bring back a sound educational setting for many.

I have a final note to other teachers offering EFT to their students:

School issues are open areas for teachers to use EFT while other more personal issues need the privacy of a therapist or counselor’s office. Do not go where the school board has reservations. Please also inform your principal that you will be using EFT in the classroom.