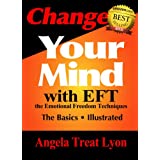 I came across EFT last summer and thought it might help a friend of mine. Colin has struggled with various problems since childhood and is now 41. He is very intelligent (two classics degrees), a good artist and very, very frustrated at the limitations of his life. He suffers from Body Dysmorphic Disorder (BDD), chronic social anxiety, a crippling fear of people (looking at them and being looked at), physical tightness especially around the throat and chest that helps prevent clear communication, and clinical depression. Quite a collection!

Though not all of these are necessarily present at the same time and often vary in intensity, seemingly for no apparent reason, these afflictions have had a devastating effect on Colin’s life. The depression largely disappeared after doing Alexander Technique 2 years ago, alerting us to the very close connection and interaction between the mind and the body. So despite our suspicion around the overuse of the word “energy” by many therapists and “new age” type oversimplification, we investigated EFT. After testing it out, we decided that it made sense and that here was something well worth trying. We initially downloaded the introduction and were so impressed that we bought the whole course.

Since practicing EFT, Colin has seen impressive results in the alleviation of several of his afflictions. However, most of these have not been permanent and seem to constantly require EFT “topping up” to keep them at bay. For instance, he often suffered from strong discomfort around the eyes (he called it “stinging eyes”), the main physical accompaniment of the fear of looking and being looked at.

After more than 20 years, the stinging eyes sensation disappeared overnight, but it frequently creeps back in stressful circumstances (e.g., crowded places). Often after one round of tapping, he feels the symptom disappear instantaneously. He has also got some of the other BDD symptoms under control. Another incidental and totally unexpected benefit is that, after being a very heavy snorer, he has become a light to medium snorer–clearing blockages perhaps?

He has been using EFT either on his own or with my input for about 5 months. For the past month or so, he has been doing a concentrated hour or more a day plus using it regularly at other times. The progress has been very up and down. Sometimes he feels as if issues are clearing and then they come back, often with a vengeance. We are both amateurs, of course, so the learning process has been difficult.

He has many, many memories of small and large traumatic events going back to early childhood, but none seem to be the “big tree or trees.” He has collapsed the negative emotions around many of these memories, some of them major, but it just seems like cutting off a few branches rather than uprooting the tree itself. It seems endless and there are times of despair and (temporary) giving up. We are beginning to wonder if we should be tapping more on the current symptoms rather than placing emphasis upon the traumatic memories from which the symptoms presumably originated.

In addition, he is aware of some resistance to healing–the hidden benefits of being ill–but is trying to deal with that also. There have been many tears and much grief recently while tapping as he sees what a terrible waste his life has been because of all these issues. Perhaps all the tapping around this and the fundamental issues is causing all the traumas he has suppressed to well up to the surface?

In the past, he has tried most talk therapies plus a few others and EFT seems to be the only therapy that really seems to produce results. But he still isn’t getting where he wants to get. He can still find social encounters of any kind (even sometimes telephone conversations) crippling and demoralizing, so he is still very isolated.

He believes something is shifting, though far too slowly for his liking! But we do flounder sometimes with all these very complex issues. Sometimes all the suggestions we find in the newsletters and online only seem to confuse matters. We are happy for you to publish this in the newsletter if you feel it appropriate and we would certainly welcome any advice you can give to Colin.