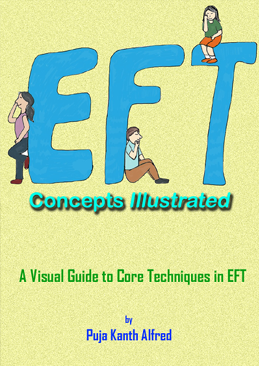 I would like to share a story about an EFT session with a client that I handled over the phone. I had not met her in person prior to this and she had never heard of EFT tapping. In this story, for confidentiality purposes, I have named her “Lekha.”

I got a call from another client saying that her friend, Lekha, was suicidal and needed immediate counseling. When Lekha called me she was crying and revealed that her 16-year-old niece had died in a road accident a few days earlier. Since the accident, she couldn’t sleep because she was experiencing recurring nightmares when she tried while secluded away in her bedroom. She felt she could not leave her bedroom because she kept having visions of her niece.

When she called, I explained to her that I would be doing emotional freedom techniques which is an energy therapy.

Then I asked her if she could rub the sore spot and tap on a few other points; I described these points to her on the phone. She immediately refused and said that she didn’t have a mental problem and she did not need EFT. I explained what EFT does and how it clears negative emotions. She became hysterical and said that what she was feeling was not a negative emotion, it was genuine grief.

“Grief is not negative!” she said.

I told her that grief was a natural emotion, but since it was interfering in her day-to-day activities, it needed to be lightened a bit. I told her that EFT would not take away her niece’s memory. The memories of her niece would always stay with her. I said, “EFT is like meditation, it will relax you, calm your nerves, will help you to accept the way things are. You don’t have a mental problem. Experiencing an emotion is not a problem; only the intensity of the emotion is a concern which can be addressed by EFT, if you allow me to.”

This made her calm and she agreed to rub on the sore spot.

I asked her to repeat the set-up statement:

Even though I feel overwhelmed with grief, I deeply and completely accept myself.

When I told her to say this sentence she said that she was not ready to accept herself without grief, so I improvised the set-up statements.

Even though I’m not ready for EFT, I love and accept myself.

After 2 rounds of each affirmation she felt calmer and had stopped crying.

Tapping on grief followed (2 rounds of each):

Even though I’m not ready to let go of my grief, I love and accept myself.

Even though I feel responsible for the death, I love and accept myself.

Even though I feel that I should have died with her, I love and accept myself.

Even though I could not keep up my promise to her, I love and accept myself.

Even though I feel that my niece is somewhere there and I will join her, I love and accept myself.

After this she said that she felt much better and peaceful. She spoke about the time spent with her niece and the other problems dominating her life. The call lasted for 90 minutes.

She called me the next day and said that she was feeling more relaxed than she had in the past few days .She was sad but getting on with her life. She had a good sleep; without nightmares. She didn’t feel suicidal anymore. My client reported that Lekha continued to improve. She was able to come out of her room and re-joined her job–which she was on the verge of quitting.

The remarkable thing about EFT is that even a few rounds at times are enough for very powerful emotions. Even if the person is not ready to do EFT, the PR (Psychological Reversal) technique takes care of that resistance completely. Also, a few rounds on some aspects take care of other associated aspects as well. Lekha got good sleep despite not having tapped on the sleep aspect.

In India, getting any form of therapy for psychological issues is still considered taboo. Therefore EFT, despite being an energy therapy, is met with resistance. However, once the process is explained clearly and the affirmations customized according to the mindset of the person seeking therapy, the resistance dissolves.