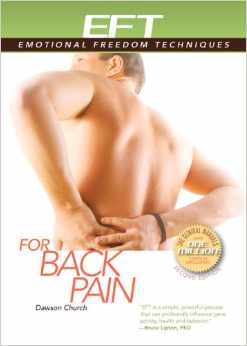 When “Alison” arrived on my doorstep her face was creased with a deep furrowed frown. She had the look of someone who had been in pain for a long time and had just come to accept it as a burden. Alison said she had been plagued with a pain in her upper back for about 4 years and pain in her lower back for the past 25 years.

Recently she had taken drugs for it, and unfortunately, reacted very badly to them. She even had to be admitted to the coronary ward because they thought she was having a heart attack. It felt to her like a tight band had been drawn across her chest. The weekend prior to seeing me, she had been doing some exercises and strained her shoulder so badly, she couldn’t raise her arm very high.

She wondered if EFT would be able to do something for her as she said she had spent over 2,000 already on alternative therapies that hadn’t worked, so another 25. (my special offer fee at that time) wouldn’t be too much to miss if it didn’t work. I reassured her that if she didn’t experience any relief, then she wouldn’t even have to pay.

We sat down and concentrated on the pain in her back, which she rated at an 8 on the SUD level of intensity number scale of 0 to 10. After one tapping round, her SUD number went down slightly to 7 out of 10, so we completed another couple of rounds, one with negative affirmations saying:

Even though I don’t want to release this pain in my back, I deeply and completely accept myself.

The second with positive:

After completing these rounds, she rated the pain as going down to a number of 5 out of 10, and for the first time in a long time, she smiled.

Another couple of rounds concentrated on the pain in her back, after which we tentatively began to explore the emotional issues that might be behind it.

Alison mentioned that her social life was okay, but she did admit to having some problems at work, having to cover for everyone who had been off sick, and feeling as though she couldn’t let the company down. She was also recently verbally abused by a customer, and undefended by her boss who witnessed the situation. She had also been given some extra tasks – beyond her physical capabilities. We went through another round of tapping on specific issues related to these instances, and came to the crux of her pain – anger.

She began to explore some problems that she had been experiencing with her manipulative cousin who had made her very angry with some of his inconsiderate actions. He had hurt her friend through his cheating and his lies and she felt very hurt by that.

She said there were so many scenes that gave rise to the angry feelings inside, but when I asked her to search for one, she easily remembered a particular scene that gave rise to very passionate emotions but she didn’t want to express it.

This was okay, as with EFT the therapist doesn’t need to know all the details of your emotional experiences, so we simply picked a word that related to the scene and concentrated on that.

Alison then mentioned a couple of long-standing issues that were being brought into focus about her male relative. She explained that she had felt angry at his not being very supportive towards her parents when they became ill. From the many issues that hurt her, we found one specific issue and focused on it. Her rage at him in that particular situation was higher than a 10 out of 10, but after tapping for several rounds, we managed to bring it down to a wonderful 3 out of 10.

At this point we took a well-earned breather and I took the opportunity to explain about how much we listen to other people, and how their words condition our thoughts. I gave a few examples, but none of them fit with her until I asked her if she was ever asked by her parents not to leave the table until she had finished her meal.

Aha! She remembered her mum always made her sit at the table and finish her vegetables first, and threatened her with not being able to have her pudding if she didn’t eat all of her main meal.

She found the funny side of this as we tapped on it, using it as a metaphor for the way things kept happening to her in her life now. We found a pattern to be that she always had to work hard–before she was able to get any pleasure in life. So she ended up not getting any pleasure out of life at all because she felt there was always something she had to do before she was able to relax.

She found herself in a situation at work having to work hard, under the management of a boss that didn’t stand up for her, under the direction of supervisor who made her do work that she wasn’t able to keep up with physically, and also the work she did for her parents when they were ill, and the lack of support and manipulative behaviour from her step-brother.

All of these situations seemed to hamper her efforts and she felt as though she was never allowed any enjoyment in life.

The EFT metaphor for Alison was:

Even though I care for people and am able to help them through difficulties, I may consider having a little bit of fun for myself as well.

Even though I don’t feel supported by anyone, and this is showing as a pain in my back, I can accept and love all of me and deserve some pleasure in life.

Even though I feel as though I have to work all the time without enjoying any pleasures, I know it doesn’t have to be like this, I can have my cake and eat it.

We decided to wind the session down at that point. After 60 minutes of tapping, Alison said that her response to the rage had lessened a lot – and that the pain in her back and shoulder had reduced. She also said that of all the money she had spent on alternative therapies over the past couple of years she had not experienced as much relief as she had with EFT – and in such a short space of time!

As she pulled her coat on to leave, I could see her shoulder was still a little stiff and she was experiencing some discomfort. However, I asked her to keep up the tapping on a regular basis.

Alison was a very reserved and quiet person who, though doubting the experience of EFT, said that it had helped her a great deal. I took solace in the fact that she was smiling when she left and her frown had softened.

A few weeks later Alison reported that she was quite happy with the way the session had gone and that the pain in her back was much less – while she said she had had an added side effect of feeling a lot calmer than she had ever done in her life.