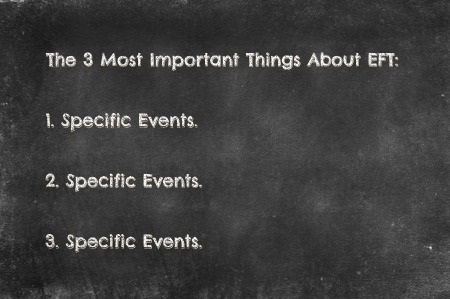 During EFT Workshops, I sometimes write on the board:

The Three Most Important Things About EFT

Then, under that, I write:

It’s my way of driving home the point that a focus on specific events is critical to success in EFT.

In order to release old patterns of emotion and behavior, it’s vital to identify and correct specific events that gave rise to those problems. When you hear people say, “I tried EFT and it didn’t work,” the chances are good that they were tapping on generalities, instead of specifics.

The person with low self-esteem might have been coloring a picture at the age of four when her mother walked in and criticized her for drawing outside the lines. She might have had another experience of a schoolteacher scolding her for playing with her hair during class in second grade, and a third experience of her first boyfriend deciding to ask another girl to the school dance.

Together, these specific events contribute to the global pattern of low self-esteem.

The way EFT works is that when the emotional trauma of those individual events is resolved, the whole pattern of low self-esteem can shift. If you tap on the big pattern, and omit the specific events, your likely to have limited success with EFT.

When you think about how a big pattern like low self-esteem is established, this makes sense. It’s built up of many single events. Collectively, they form the whole pattern.

The big pattern doesn’t spring to life fully formed; it’s built up gradually out of many similar experiences.

The memories engraved in your brain are of individual events; one disappointing or traumatic memory at a time is encoded in your memory bank. When enough similar memories have accumulated, their commonalities combine to create a common theme like “poor self-esteem.”

Yet the theme originated as a series of specific events, and that’s where EFT can be effectively applied.

You don’t have to use EFT on every single event that contributed to the global theme. Usually, once a few of the most disturbing memories have lost their emotional impact, the whole pattern disappears. Memories that are similar lose their impact once the most vivid memories have been neutralized with EFT.

Tapping on global issues is the single most common mistake new EFT users make with EFT.

Using lists of tapping phrases from a website or a book, or tapping on generalities, is far less effective than running into events that contributed to your global problem , and tapping on them. If you hear someone say, “EFT doesn’t work!” the chances are good that they’ve been tapping globally rather than identifying the specific events.

List the events, one after the other, that stand out most vividly in your mind when you think about the global problem. Tap on each of them, and you’ll usually find the global problem diminishing of its own accord.

This is called the “generalization effect,” and it’s on of the key concepts of EFT. 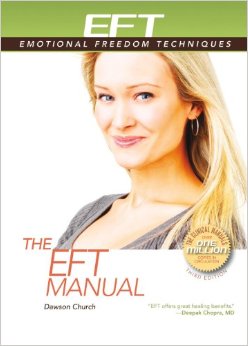 Read more about Specific Events in The EFT Manual