EEG (electroencephalograph) recordings are sometimes called “brain maps” because they show what’s going on inside the brain. Brain maps provide an unfolding picture, in real time, of the way the brain is processing information: which regions are active and which brain waves are dominant.

There are five basic brain waves, electrical patterns that are distinguished from one another by their speed (“frequency”). The slowest is delta, ranging from 0 to 4 cycles per second or Hertz (Hz). Next is theta (4-8 Hz), then alpha (8-13 Hz), beta (13-30 Hz), and gamma (up to 100 Hz).  An EEG will show that all five patterns are usually present, but at any moment in time, one will tend to dominate the brain or a particular region of the brain. Each brain wave is associated with a different type of mental activity, and that mental activity is occurring when the related brain wave is dominant.

For instance, neurofeedback trains participants to cultivate an alpha state. Alpha waves are associated with relaxation and low levels of stress. Beta waves increase when we are focused on a mentally demanding task. But when we are upset, anxious, or thinking negative thoughts, our brains exhibit much higher levels of beta. Moderate levels of beta reflect concentrated thought while high beta is the signature brain wave of fear. The brain maps shown below indicate the relative dominance of each of the brain waves in the brain’s right and left hemispheres.

Fig 1. Normal brain function: Note that each of the brain frequencies is present, with balance between the left and right hemispheres. 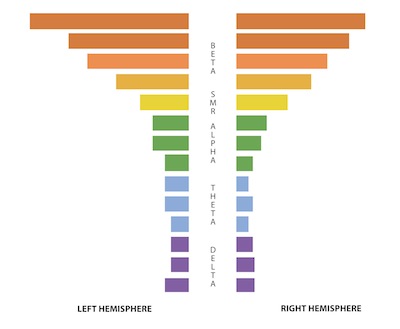 Fig 2. Anxiety: A person with anxiety has a lot of high beta (red) and little alpha (green), theta (blue), or delta (purple).

Fig 3. Increase in alpha activity: A subject going through a breakthrough has flares of alpha (green), even though they still have a pronounced anxiety that shows up as beta (red). They are also amplifying theta (blue), though the waves are not balanced equally between left and right hemispheres.

A participant at a conference worked with clinical psychologist David Feinstein, PhD, while hooked up to an EEG. The changes in her brain waves during the session were fascinating.

Her issue was excess weight, and David’s initial exploration led to her recognizing an underlying emotional dynamic in her struggles with her weight. On a deep subconscious level, she didn’t want to release the weight because it was linked to the belief that “Being thin will produce unwanted attention from men.”

Further exploration brought up a childhood event that had produced sexual trauma. 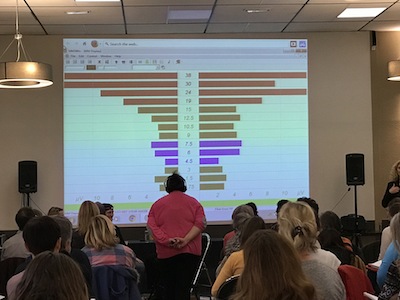 Fig 5. At the beginning of the session, the client has extensive high-frequency beta (red color at the top), the signature brain wave of fear.

Fig 6. As she begins to process her emotions, she has large flares of alpha (yellow-brown color in the middle),indicating that she was starting to relax and feel less distressed.

As well as the short EFT method, David used the 9 Gamut Procedure with her. The 9 Gamut is commonly used during tapping sessions, and it is particularly effective when severe psychological trauma has been identified. It involves eye movements similar to those used in Eye Movement Desensitization and Reprocessing (EMDR). One component of the 9 Gamut includes humming and counting. These are hypothesized to engage both the right and left hemispheres of the brain.

For this particular client, the eye movement part of the 9 Gamut Procedure produced large amplitudes of theta and delta waves in the brain. Theta waves are associated with healing, while delta is associated with feelings of connection with the universal energy field. The EEG recordings showed that the 9 Gamut eye movements were beneficial in allowing the client’s brain to process the emotional impact of her early life trauma.

Fig 7. The 9 Gamut produces flares of theta and delta (purple and brown colors at the bottom).

The increase in delta and theta meant that her brain was processing information differently after tapping and the eye movements. She was able to think of the triggering events and maintain that integrated brain state.

However, the hum and count parts of the 9 Gamut Procedure both produced complete shutdown in the brain’s right hemisphere for this particular client. While the eye movements were immediately beneficial in helping her process the traumatic experience, the humming and counting were not.

Fig 8. Humming and counting produces shutdown in this particular client’s right hemisphere (on left in photo).

At the end, David asked the client to imagine a real situation. The words “imagine” and “real situation” produced a momentary complete shutdown of both hemispheres for a split second, after which she was able to successfully follow the instruction.

Fig 9. During the testing phase, the right hemisphere (on left in photo) shuts down momentarily in response to particular words.

After the session, neurofeedback expert and naturopath Donna Bach, ND, interpreted the results for the audience. When the client heard Donna’s explanation, she had large flares of alpha waves.

Alpha represents the state of relaxed alertness and is an ideal brain wave that neurofeedback trains people to cultivate. This client’s alpha flares indicated increased connection between conscious (beta) and subconscious (theta and delta) information processing.