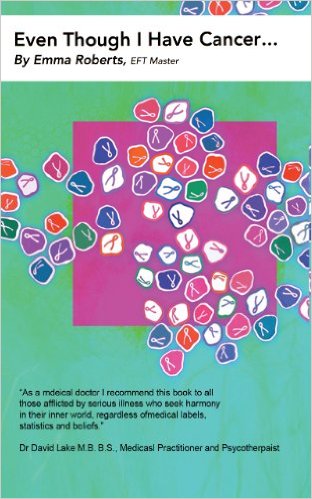 I live on the West Coast and have a friend on the East Coast who has breast cancer. Hope was undergoing chemotherapy in advance of surgery and, as a side effect, was having terrible dizziness caused by low blood count and nausea.

I told her I wanted to teach her EFT and do some EFT treatments on her over the phone. I had her download the manual so she could follow the tapping sequence. The day I called, she had no nausea, but she rated her dizziness as a 7 out of 10. She had actually fallen down in her house the day before because she was so dizzy. We did one tapping sequence using the phrase:

Even though I am very dizzy…

I asked how she would rate her dizziness after the one sequence. There was silence for a minute and then she said she was shocked because she was not dizzy at all. Then she revised that to say, well maybe 0.5 on the 0-to-10 scale. She then said she had to get off the phone and get something to eat. She had not been eating at all because when she was dizzy, eating caused extreme nausea. Now she  was hungry and felt she would be able to keep her food down–and she was able to. Although her dizziness returned at a low level after each chemo treatment, it never again reached a level higher than 3.

Approximately 10 days after the initial treatment, I called to see how Hope was doing. She said she almost didn’t answer the phone because her nausea was a 10 on the scale of 0 to 10 and she could barely talk. I suggested we do EFT and I would do the talking while she tapped along with me. The phrase we chose was:

Even though I feel like I am going to throw up…

We did two tapping sequences and there was no change. I suggested we both tap on the side of the hand point while repeating the chosen phrase. Immediately after we started tapping on that point, her nausea level started going down. We repeated the tapping sequence and the side of the hand tapping several times and were able to get her nausea level reduced to a 3. She told me that she had not really believed that anything was going to be able to help her extreme nausea.

Hope’s nausea came back after each chemo treatment and lasted for three days. She was able to control it somewhat herself but said it was much more effective when we worked together.

Hope has since had surgery for her breast cancer and anticipates starting another round of chemotherapy next week. I have offered to continue to work with her as needed.

Here is a letter I received from Hope after these treatments.

Dear Maryann, I’m writing this letter to express my sincere gratitude for your help in dealing with the side effects associated with the chemotherapy I receive for my breast cancer. On two separate occasions we talked and I was experiencing dizziness, due to low blood counts and nausea, due to the chemo. Through EFT, I was able to bring down both uncomfortable feelings from levels nearing 10 to 3 or below. I was and am truly amazed at the effects of EFT. I continually use EFT alone but was amazed at the powerfulness of you combining your energy with mine. You are a true friend and consummate professional. I would refer any of my open-minded friends to you for help and support.