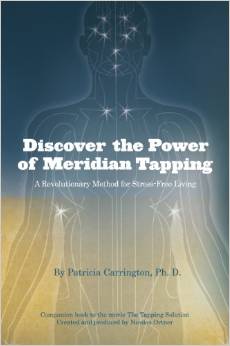 I would like to report an unusual effect reported to me by Hank Krol, a counselor at Stairways Behavioral Health, an outpatient mental health clinic in Erie, Pennsylvania which deals with severely disturbed patients.

Hank has developed a most interesting method of dealing with major depression using EFT.

It involves breaking up the general category of “Depression” into 15 component depressive symptoms, having the patient check those which apply to him or her, and then applying EFT to each one in turn, usually over a number of sessions.

I have written up this method for therapists and others interested in the treatment of depression in my current Newsletter, but I will report here a rather puzzling effect of EFT experienced by one of the depressed patients whom Hank Krol has been treating.

“Claude” (not his real name) sought help at the clinic following a prolonged hospitalization for major depression. When commencing to treat him, Hank began by using EFT with Claude on relatively minor issues completely unrelated to his depression.

The first application was for a shoulder and lower back pain for which the tapping brought immediate relief. Claude’s pain (on a 0-10 scale) came down from an initial “7 or 8” to a “1” by the end of the session, and Claude conceded that EFT was effective.

When he returned for the next therapy session a week later he had used EFT several times in the interim and this way he had managed to keep his shoulder and neck pain minimal. He then asked Hank, quite out of the blue, if he thought EFT would “help me with my fishing.”

Claude is semi-retired and one of his favorite pastimes is going down to the local creek where a number of experienced fishermen assemble daily. His girlfriend introduced him to fishing following his discharge from the hospital and he took to it right away.

Being somewhat of a perfectionist, he bought all the right equipment (the very best) and carefully observed the other fishermen, making sure to use exactly the same bait that they did, to fish in the same area, and so forth.. While on the one hand he looked forward to his new hobby, it had so far been extremely frustrating for him.

There were usually at least ten other fisherman lined up on the bank and, according to Claude, almost all of them would manage to catch large numbers of BIG Steelhead Trout (Erie is the top city in the world for this variety of fish) each time they fished. By contrast, although the creek is known for its exceptional trout, Claude would consistently leave at the end of the day with only a couple of “small fish”, if any, in his pail.

This was particularly frustrating because to his knowledge he was doing nothing differently from the other fishermen, but rather following their procedures “to the letter”. He recalls that he fished with minimal luck on at least 15 to 20 different occasions and did not experience a single successful day during that time.

Claude was persistent however and he kept on fishing.

In fact, he was wearing his fishing boots at this session and preparing to return to the creek right after his appointment.

Hank responded to Claude’s question about using EFT for fishing, by saying, “Let’s try it.”

It is important to note, however, that Hank did not have Claude address his fishing problem as “the problem”- that is, he did not suggest that he tap on, “Even though I’m a failure at fishing…” or similar statement. Instead he questioned him about his emotional reactions to the failure and asked Claude to tap only on his feelings.

Claude was able to identify three primary emotional reactions to this situation: “jealousy”, “embarrassment” and a feeling of “lack of confidence” — emotions quite familiar to him in other situations as well.

When he tapped on “embarrassment” his intensity was originally a “10” and after three rounds it had come down almost to zero. “Jealousy” was substantially reduced by the end of the session, and “lack of confidence” was similarly lessened. Claude was pleased with these results and marched out to test them at the creek.

When he returned for his next session he said (words to the effect of) “I can’t believe it, but that tapping worked for the fishing!”

When he went to the creek after his therapy session, the other fishermen were lined up and as usual were pulling in fish after fish. Claude set up his fishing tackle and waited. But this time he didn’t have to wait long. The fish began biting soon after he arrived there, and he found himself, to his amazement, bringing in so many Steel Head Trout that soon he had caught more than he could possibly use – and they were big ones too.

This was the beginning of a new era.

Claude systematically used EFT each day before he fished, and each time that he tapped away his embarrassment and jealousy and lack of confidence he kept on having successes. He estimates that since he began using EFT up until now he has experienced 30 to 40 truly “good” fishing days, and only 12 days that were “not so good,” a remarkable record for him.

At this writing, his success at fishing continues, contributing greatly to his self-esteem.

Asked how he explains his extreme lack of success before he learned EFT, Claude says that he attributed it to “bad luck” and that he had been “unlucky” all of his life. While he also lacked as much experience as the other fishermen, the fact that there was an immediate turnaround on the very day he commenced using EFT, strongly suggests to him that “bad luck’ really didn’t have much to do with it.

He says that when he taps on the three issues (embarrassment, jealousy, and lack of confidence) before he goes fishing (he does this religiously) that he goes to the creek expecting to catch fish and that his lack of confidence is gone.

Claude still has major problems to confront in his life, many of them stemming from his extreme under-evaluation of himself, but at least his confidence with respect to fishing seems to be handled. And under the guidance of Hank, he has been using EFT for some months now for an even more basic issue in his life–his lack of self-esteem. Interestingly, he reports a marked improvement in his self-esteem since he has been doing this.

To get back to his improvement in fishing, although we can speculate on the reasons for the unexpected outcome, actually none of us know exactly how EFT worked to achieve its results from the standpoint of the fish.

Since using EFT for this issue, is it that Claude is now engaging in some uncharacteristic behavior when fishing that has turned the outcome around for him, even though he is not aware of behaving differently when using EFT? Obviously if he is doing this it is not apparent to him, and it is hard to imagine how confidence or lack of it is conveyed to the fish so that they either take the bait or not.

Those who have studied the operations of energy fields have observed that subtle energies are not confined to the individual but can impact many other organisms and sometimes even inanimate objects (as in the studies of the effects of thought on random number generators conducted by Robert Jahn, Dean of the School of Engineering at Princeton University).

Reasoning from this perspective, one might possibly wonder if Claude’s much more relaxed and confident attitude about fishing is somehow being conveyed to the fish through means other than through the five senses. This would be in some ways similar to what happens during surrogate tapping.