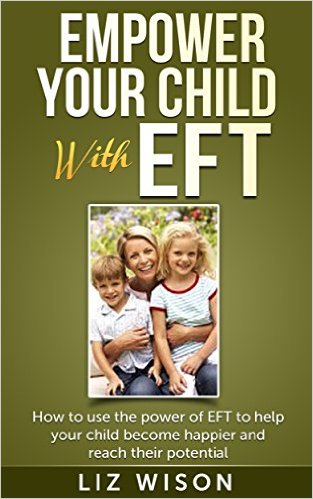 Here are three examples of using EFT with children on the issue of fear.

Charlie would not go to his bedroom because of “monsters” living there. Mom was at her wits end, having to escort him to his room and stay with him every night until he fell asleep. He was 10 years old and spent too much time watching TV and sneaking downstairs to watch scary movies with his older brother. The monsters were composite images of bats, gorillas, monkeys, and horrible Freddie–of Friday the 13th fame–with the long pointy nails (that scratched on his window and lived out on the roof).

I had Charlie describe each of the monsters in detail, tell me where they lived in his room and what were the jobs of each. The gorilla was the biggest and therefore the boss of the others. I muscle tested to find out if we cleared the boss with EFT, would the other go away too. Yes. We rated the boss and tapped. He went away and the other monsters began to get smaller. We rated and tapped on each monster and they went away. Freddy took a few rounds of tapping. This was done with the metaphor of karate, which Charlie has studied–the story line being that he was his own hero and he would get rid of these silly monsters who kept him from getting the rest he was due.

Charlie reported to his mom that “it was a hundred times better” and, within a few days, Charlie said he didn’t think about the monsters anymore. He was able to go to his room without his mom being with him. It has been over one year and no return of monsters.

Jane is 9 years old. She has been studying gymnastics for six years and is a star in her gym. She suddenly became fearful and refused to return to practice.

The interview revealed that she was learning to do a handstand backwards on the balance beam and she was afraid that her hands did not know what to do, the core issue being that she didn’t know how to fall if she had to. We tapped on fear of falling, not knowing how to fall, fear of being hurt, fear of having people watch her fall, fear of letting her team down.

Then, after the tapping, I asked her to see herself moving backward on the beam, seeing herself knowing how to fall, where her hands could go, how her knees could bend, how she could land and remount. She practice falling skillfully and remounting, she practiced her hands knowing where to go, she practiced her feet landing on the sweet spot of the beam.

The problem was gone. I asked her mother to have her review falling safely with her coach and to walk it through on the grounded balance beam. Jane returned to her gym and moved up to the next level. Met her mom several months later and she said that only one other time did they need to tap and Jane has been fine ever since.

Paul is 13. In practice, he can make 28 out of 30 baskets. In the basketball game, he falls apart. We tapped on falling apart, which became self-talk “I am too slow”–tapped on being slow. The self-talk was the driver. Then, using NLP, we modeled good shots that rose from the belly-button up and rolled through his torso and out his fingertips. He practiced that state and then we future paced it to his next games. He said that he felt more relaxed than ever.