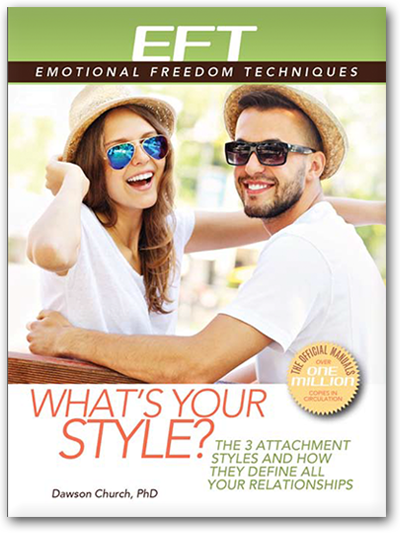 An 84-year-old woman, “Sally” (not her real name), was originally referred to me for EFT because she was experiencing a lot of anxiety brought on by the passing of her husband of 65 years. She was “very open to this unusual technique,” she said, because she trusted her social worker who had referred her.

Sally was encouraged about the efficacy of EFT because she got relief from the anxiety after doing EFT with me. I also taught EFT to her caregiver so the two of them could tap together and the caregiver could support her in making it a daily practice.

Sally then wanted to branch out and work on some other things that were bothering her. The most pressing issue that came up was how she behaved when she was around her 27-year-old granddaughter. A lot of their time together was spent talking about the granddaughter’s weight, what she eats, what she should eat, what she shouldn’t eat, etc., and it was very upsetting for both of them.

Sally said she couldn’t help herself. Her reactions were totally automatic.

She knew how much her granddaughter hated it and Sally certainly didn’t want her to stop coming to visit, which was due to happen soon.

Sally is a very slender woman. I asked what her earlier years were like regarding her own weight. She said she was very fat and hated it. (Given what she looked like now and some pictures I saw of her, “very fat” was definitely a matter of perception.) We worked on all her feelings and memories about what it was like for her.

As we tapped, I had her “tap and talk” about all the feelings and beliefs that came up. She was embarrassed, bullied, felt undesirable, ashamed, and so on. She became a bit of a loner because none of the cool kids were fat.

Sally came to realize she didn’t want her granddaughter to have to go through all those negative experiences, so that was why she tried to monitor, control, and manage her weight.

As we tapped about what it was like for her, the intensity began at a 10 on the SUD scale and dropped to a 1 after a few rounds of her tapping and talking, and some rounds that I led. She felt elated because she thought she could be with her granddaughter “in a different way now.”

She was about to put this to the test. Her granddaughter was coming to visit.

I checked in with her the day before the visit (a week after our session) and she was still feeling confident about her emotional state. We did a round over the phone anyway.

I called her the day after her granddaughter’s visit and she was ecstatic! She said it was the best day they had ever had together and that it was “easy to look at her beautiful face instead of focusing on her body.” She continues to maintain a wonderfully satisfying relationship with her granddaughter.

It is greatly to Sally’s credit that she was so open to exploring the issues via EFT and that she was able to see how her old reactions were creating the problems with her granddaughter.